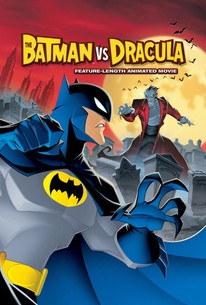 The Dark Knight faces off against the Dark Prince when Dracula arrives in Gotham with a nefarious plan to enslave the entire city -- including Batman, The Joker, and Penguin -- in this animated, feature-length adventure.

Kevin Michael Richardson
as The Joker

Critic Reviews for Batman vs. Dracula

Audience Reviews for Batman vs. Dracula

I for one don't do Animated Movies, except for maybe something like Ice Age, Incredible, movies in that line. I found this at Oldies.Com for a good price and figured what the heck, it had Dracula in it. Well Dracula is a pretty freaky guy in this movie, and Batman looks to be a little over weight and out of shape but hey he still beats the dog snott out of Joker, Penguin, and Dracula. Its not a bad movie but I would not give it more then 3 stars, its not old school Batman (1950-1960) but a newer Batman. Understand 3 stars is high for me, I wouldn't be caught dead watching Simpson?s, Family Guy, Whatever Dad, that?s Trash plain and simple and if your letting anyone in your family under 16 watch that garbage, don't be one of these parents bitching about the books down in the school or public Library, Oh Sorry I'll get off my soap box. 3 Stars.

The Batman was never as good as Batman: The Animated Series. It became more childlike just as the movies were becoming more adult. With this in mind The Batman vs. Dracula sounds awful. Kind of like the old Batman Meets Scooby Doo. Surprisingly it's a success. Never camp but never too dark. The story ties in the Batman and Dracula myths quite well, and the script is smart enough to draw on comparisons between the two. All the problems are inherited from the show itself, with some bizarre if interesting designs for Penguin and Joker. Bat Fans can rejoice at another entertaining spin on a classic hero, just don't expect The Dark Knight or B:TAS levels of sophistication.