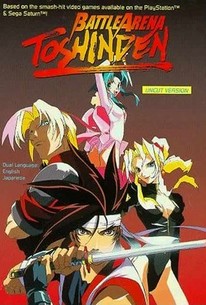 While many American films inspire video games and other merchandise, this animated feature, like many from Japan, is based on the popular series of video games called Battle Arena Toshinden. Because the Toshinden video game is essentially a martial-arts fighting game in the tradition of Street Fighter and Mortal Kombat, the plot isn't much more than a vehicle for some spectacular fight sequences. ~ Jonathan E. Laxamana, Rovi

Blood makes the grass grow, kill, kill, kill. That's about all you need to know about this.

There are no featured reviews for Battle Arena Toshinden at this time.