Battle Beyond the Stars1980 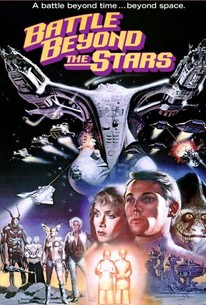 Battle Beyond the Stars Photos

With a plot based on The Magnificent Seven and The Seven Samurai, this science fiction film involves a peaceful planet attacked by invaders. Looking for assistance results in the hiring of a diverse group of mercenaries.

Critic Reviews for Battle Beyond the Stars

...there's a degree of knowing wit in the dialogue that makes Battle Beyond the Stars a guilty pleasure...

John Sayles manages to work some offbeat science-fiction ideas around the edges of an otherwise derivative plot...

Happy to distract the viewer with chase sequences and extended invasion showdowns, also using Danning's sex bomb appeal to keep attention away from the budgetary limitations. Why pay for explosions when there's spandex?

Ah, that lovable B-movie sci-fi crap from the early eighties.

Audience Reviews for Battle Beyond the Stars

Hot on the heels of a small sci-fi production called 'Star Wars' came this remake of 'The Magnificent Seven' and 'Seven Samurai'. If you haven't guessed the difference was the story has now been set in space. A Roger Corman production so you might think it would be space trash, but at the time this was quite a big release as sci-fi was popular again. The people involved with this film is actually quite impressive, for one James Cameron was in charge of the effects (mainly models) so this explains why they look so detailed, imaginative and quite good. The cast for the film is also impressive for the time, looking back they are all your typical B-movie players really. Classic character actor Richard Thomas is the young hero, the legend Robert Vaughn plays a space merc, John Saxon is the evil space villain and George Peppard is the 'Space Cowboy'. Yep he has no name other than that, cos he's coooool. All are legends in their own right (accept Thomas maybe) but you can't deny all have popped up in some glorious B-movie fluff in their time, film and TV. The film on the whole is a brave effort and bold with certain ideas. The start of the film seems quite sensible with its 'Star Trek' like score playing accompanying slow camera pans of various spaceships...all very 'Star Trek-ish'. The costumes aren't too bad either, this isn't a 'Flash Gordon' type affair, well not too much. Of course you can see many similarities to other films in both costumes and various ideas but that is pretty inevitable seeing as 'Star Wars' came out in 78. As the film progresses it does become a tad dull really, the whole time is spent with the hero looking for mercs to save his home planet. This is where the film tends to rollercoaster as some people he meets are pretty good in design, others are not. Take Peppard as the Space Cowboy, his ship's interior looks good, its well designed and has a nice 'Millennium Falcon' feel about it, the character himself is cliched but Peppard makes the role work nicely. Some ships looks good while others look terrible, laser effects are poor and not helped by the quite ridiculous sound effects used. The names used for some of these alien races, planets etc...tend to be rather daft too. Sets vary from scene to scene with the odd one looking nice but most looking rather plastic with merely lots of flashing lights everywhere. Speaking of the 'Millennium Falcon', Robert Vaughn's character is a complete 'Han Solo' rip off in my opinion, right down to his boots. Other characters like the 'Nestor' and 'Valkyrie warriors' are just your typical B-movie crap frankly. They look like they were designed in the 50's, bad makeup, tacky fake plastic looking costumes and completely childish, real cheap sci-fi. From time to time there are some nice ideas though, the character of 'Cayman' is a nice addition with a reasonable looking reptilian mask. Oh I forgot...the 'Valkyrie warriors' are stunning women with tight outfits that easily reveal their enormous breasts. Just like it would be in space, what? are you saying there aren't alien races like that?. The film does get sillier and sillier as it goes on, the ham builds with performances and effects. I loved the evil laughter sequences by Saxon and his mutant henchmen...classic stuff. A little bit of evil dialog then pause for some evil laughter with your henchmen. The makeup design for 'Sador' actually looks a bit like Ed Wood's 'Plan 9 from Outer Space' with the single face mark, the mark of the baddie. The film kicks into gear towards the end as we see the final battle between 'Sador' and good guys. Lots of laser gun fights, dodgy space battles with the same model sequences being reused over and over and some great cheesy acting from all. Its clear to see many influences in this film from classic sci-fi such as 'Star Trek', 'Lost in Space', 'Westworld', 'Forbidden Planet', 'Star Wars' and many films from the 70's. But you have to hand it to Corman and director Murakami as they too have influenced many sci-fi films with this. The whole concept of a 'space cowboy' may well have originated here, if you overlook 'Han Solo'.

I went into Battle Beyond the Stars hoping to discover some unseen craptastic sci-fi epic in the vein of Starcrash or The Last Starfighter (the latter actually being a pretty well-made film). What I got instead was a pretty boring cheesefest. This isn't to say that the movie is totally free of any entertainment value, but being under the assumption that it was a fun crap movie, I was disappointed. There were only two things that I knew about the movie going into it. I knew that it was a Roger Corman production and I knew that the Skotak brothers as well as James Cameron worked on the special effects, and that's about it. Really that's about all there is to say about it. Well, there's also John Saxon, and Sybil Danning, so I guess that might warrant another star. It's not a great movie, and not even in an enjoyable way. Not even because the main ship looks like a pair of breasts. It doesn't matter, it's just very bland and boring. See it for the design work, John Saxon's over-the-top performance and Sybil Danning's body. That's it.

Seven Samurai is my favorite film of all time. It's perfection. The Magnificent Seven is also a fantastic movie. In 1980, Roger Corman brought us this slice of budget sci-fi. Taking the classic story and reworking it to slide nicely into the Star Wars excitement, Battle Beyond the Stars is a mishmash tapestry of cheapness, but some genuinely great bits. The recruitment scenes go on far too long, with Thomas having to travel through space, rather than just one city. The warriors themselves are boiled down to pretty darn simple emotions/motives. Obviously, Seven Samurai had the benefit of a 220 Minute running time, but they could have tried a bit harder. Thomas is a great hero, the simple, gentle man thrown into a world of war. His progression is well charted and works a treat. Some of the practical effects are nice, and some are even too cheap for my taste. A space setting is a great way to update the classic tale, but unfortunately this film wrote checks that it was unable to cash.

The ship has boobs, what more do ya want from a Roger Corman production?

Battle Beyond the Stars Quotes