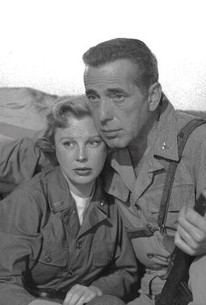 In his only MGM film, Humphrey Bogart plays the commanding officer of a M*A*S*H unit during the Korean War. Bogart runs his operation by the book, though he can take time out now and again for compassion. When nurse June Allyson shows up, Bogie is irritated by her foolhardiness and misplaced idealism. Need we tell you that the two "opposites" eventually fall in love? Keenan Wynn steals the show as the camp's wheeler-dealer, a sort of ancestor for such future insouciant M*A*S*H characters as Hawkeye, Trapper John and B.J. Hunnicutt. According to Hollywood scuttlebutt, Humphrey Bogart liked writer/director Richard Brooks because he could walk all over him. Brooks doesn't appear too servile in his disciplined handling of the film, though one can detect a slight lack of enthusiasm on his part.

A war story that has everything but a plot.

An absorbing, often tingling background of a mobile Army surgical hospital at the Korean front. Unfortunately for the general pace and impact, considerable time is allotted to a dawdling and familiar personal drama.

Though not one of Bogart's strongest, this serviceable feature is one of few war (Korea) films in which he wears uniform, and his only MGM picture, co-starring with that studio's reliable performer, June Allyson.

Singularly undistinguished except for Bogart's presence.

There are no featured audience reviews yet. Click the link below to see what others say about Battle Circus!