Battle For The Planet Of The Apes1973 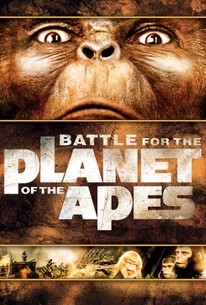 Critics Consensus: Bereft of bright ideas and visually shabby, Battle for the Planet of the Apes takes a celebrated franchise and blows it all up -- the maniacs!

Critic Consensus: Bereft of bright ideas and visually shabby, Battle for the Planet of the Apes takes a celebrated franchise and blows it all up -- the maniacs!

Battle For The Planet Of The Apes Photos

The fifth and last of the original series of motion pictures based upon author Pierre Boulle's imaginative novel Monkey Planet, this science fiction film was the least-liked by the series' legion of fans. Roddy McDowall returns as Caesar, the rebellious intelligent chimp of the previous film, Conquest of the Planet of the Apes (1972). Caesar led his brethren in a revolution against their human masters earlier, but humanity has since nearly destroyed itself in a nuclear apocalypse, and survivors are second-class citizens within ape society. Now a beneficent ruler of his people, Caesar encourages a fragile, peaceful coexistence with humans, despite the protests of militaristic gorilla leader General Aldo (Claude Akins). When Caesar learns that recordings of his murdered parents may exist in the Forbidden City, he journeys to the irradiated wasteland with the human MacDonald (Austin Stoker) and the wise orangutan Virgil (Paul Williams). Although Caesar finds what he's looking for, he also attracts unwanted attention: mutant humans who still dwell underground in the devastated war zone follow the search party back home, leading to a climactic battle and Aldo's tragic challenge of Caesar's authority. Suffering greatly due to penny-pinching studio 20th Century Fox's low budget, Battle for the Planet of the Apes (1973) is most notable for a cameo by director John Huston as an ape named "The Lawgiver," who appears in a wraparound segment. ~ Karl Williams, Rovi

Andrew Knight
as Mutant on Motorcycle
View All

Critic Reviews for Battle For The Planet Of The Apes

Considering the usual fate of sequels, it's not so much that this final effort [from a story by Paul Dehn] is limp, but that the previous four pix maintained for so long a good quality level.

[It] seems reluctant to use the potentials for astute comic strip philosophy that all the other films revelled in to a greater or lesser extent.

Battle looks like the last gap of a dying series, a movie made simply to wring the dollars out of any remaining ape fans.

The Planet of the Apes series started well, and gradually decreased in budget and quality. By Battle the budget is all but gone, and all the believability and excitement has gone with it.

The problem here is basically one of script, though the lowering of production values has taken its toll.

Some solid ideas at its center expounding on the series' omnipresent themes of race relations and destiny vs. free will, but is hobbled by its too-apparent dime-store budget and a singular lack of ambition.

Battle ends with a deep sense of melancholy and grace, a timeline defying notion that Caesar's decency in fact altered the course of history.

Battle...is where the dwindling budgets of the film in this series finally manage to score a fatal hit.

Rich Cline
Shadows on the Wall
View All Critic Reviews (28)

Audience Reviews for Battle For The Planet Of The Apes

Building off of "Conquest of the Planet of the Apes," Battle does for this series what many great sequels have done in the past, making the set-up even better once you get to the action. Everything that happens in this film is for a purpose, even if it brushes through everything quickly due to it's very low budget. The budget has been noticeable in this entire series, and that has always been a downfall, but I rather enjoy how everything looks at times. Every one of these films had their one moment to shine, and this film delivers more of that once again. Sure it's dumb and lazy at times, but it's a satisfying conclusion to a very up and down series. This saga was very enjoyable.

Battle For The Planet of The Apes is I think the worst film of the series. I didn't enjoy it as much as the other films and I felt it was a waste. The film could have been so much better than this, but instead this film is a mediocre conclusion to a great Sci-Fi series. The story was poorly crafted, and really not as interesting, engaging and thrilling as the previous entries in the franchise. The actors looked bored in this film, and personally I think the previous film would've made a fine conclusion to the series. However they needed to make a bit more money and they created this disappointing final entry in the series. This film could have been great, and the series could have ended on a high note, but with films like this you realize that the filmmakers are just making a film for the sake of making a film no matter how bad the story is. The film had an interesting idea, but suffered from poor development and it's as if the screenwriters weren't that interested in creating a terrific final chapter in the Apes franchise. This final entry leaves you wanting more, leaves you wanting a better crafted film. This film is a real disappointment and it doesn't satisfy like the previous entries before it. This is a sloppy final to a great series and fans of the series had to wait till Rise of the Planet of the Apes released in 2011 to get yet another phenomenally excellent Apes film. This one isn't great; it's mediocre at best and doesn't entertain like the previous entries in the series.

The Lawgiver tells the children of the future a tale of the planet earth and the influence of two apes who went back in time and had a son Caesar. Caesar liberated the apes on earth and brought mankind and apekind together after the war. However an exploration into the ruined cities brings the apes into conflict with the mutants and the humans get trapped in the middle. The final of the films is the real low point of the series but its hard to blame the film makers, the budget was at a all time low here and the studio wanted a more lite family film here. The plot lacks the dark undertones and fatalism of the other films and an attempt to `get deep' at the end doesn't do it alone. The basic plot is a war between the mutants and the gorillas with the peaceful chimps and loving humans in-between. The action is average at best and the dialogue leaves no room for subtexts. Worse still is the makeup which has declined far away from the standard set in the original. Here the actors clearly wear rubbery masks - General Aldo being the worst by miles! The mouths barely move and certainly don't move in time with the words. It's a shame but it does show how the standards of the first two films had fallen so far by this stage. The cast are OK but the majority are trapped behind unhelpful masks. Even John Huston looks trapped behind a mask that almost totally renders him unrecognisable and unemotive. McDowall continues his monkey madness with yet another role and he's actually quite good. The human roles are the best as they are free to talk and the mutant leader (Eastham) even manages to get a few funny lines out before all the fighting kicks off. Overall the quality of the makeup reflects the effort put into the film. The makeup is shoddy and the plot and subtexts are back of matchbox stuff. There are a few nice touches and it tries to add insight in the last 10 minutes but by then it's all a bit late......mind you it's still better than the remake of the original.

Virgil: Teacher only reverted to type under provocation. He... he spoke like a slavemaster in the old days of our servitude when we were conditioned to mechanical obedience. He, uh, he uttered a negative, uh, imperative. Caesar: Could you put that into words which even Caesar could understand? Virgil: Uh, he said, "No, Aldo, no!"

Battle For The Planet Of The Apes Quotes