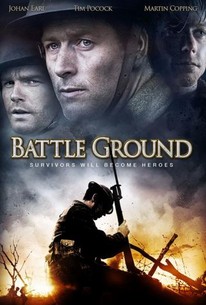 WWI, France, 1916. When an allied charge on the German lines goes horribly wrong, Sergeant Major Arthur Wilkins (Johan Earl, A Perfect Life) finds himself stranded in No Man's Land. Reuniting with two other survivors (Tim Pocock, X-Men Origins: Wolverine and Martin Copping, Zombie Hunter), Wilkins must find a way back to the British lines before the German army and an impending artillery attack wipe them out. Meanwhile, back in London, Wilkins' wife Grace struggles to hide a dark secret that could destroy her family. (c) Official Facebook

While Forbidden Ground can't match the scope of Peter Weir's Gallipoli and Stanley Kubrick's Paths of Glory in its tough-minded depiction of the First World War, the film successfully captures the personal tragedy and human sacrifice of the experience.

An impressive and memorable film that should have a long life in digital form, even though its cinema releases are limited

There are no featured audience reviews yet. Click the link below to see what others say about Battle Ground!