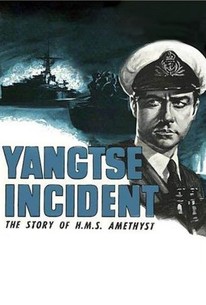 The Yangtse Incident is the saga of the Amethyst, a British vessel left stranded in China during the Communist takeover. The British government tries to reclaim the Amethyst, only to run up against a Great Wall of Red bureaucracy and propaganda. It is up to Lieutenant Commander Kearns (Richard Todd) and his valiant crew to pilot the Amethyst down the Yangtse, under cover of night, without arousing the suspicions of their Chinese "hosts". It is to Akim Tamiroff's credit that he makes the character of Chinese Colonel Peng a three-dimensional figure despite his villainous behavior. Released under a variety of the titles, Yangtse Incident is best known to American TV viewers as Battle Hell.

There are some remarkably realistic scenes of naval warfare, with Richard Todd as the embattled British commander.

There are no featured audience reviews yet. Click the link below to see what others say about Yangtse Incident: The Story of H.M.S. Amethyst (Battle Hell)!