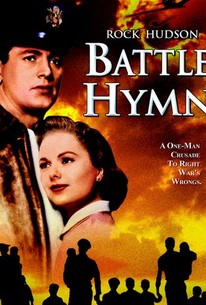 Battle Hymn was inspired by the true story of American minister Dean Hess, played here with rare sensitivity by Rock Hudson. A bomber pilot during World War II, Hess inadvertently releases a bomb which destroys a German orphanage. Tortured by guilt, Hess relocates in Korea after the war to offer his services as a missionary. Combining the best elements of Christianity and Eastern spiritualism, Hess establishes a large home for orphans. The preacher's efforts are threatened when the Korean "police action" breaks out in 1950. Battle Hymn was one of several collaborations between Rock Hudson and director Douglas Sirk--though Sirk felt that Robert Stack would have been better suited to the role of Rev. Hess.

Paul Sorenson
as Sentry
View All

...doesn't miss a single cliché as it makes a calculated circuit of the old militant sky-pilot plot.

Douglas Sirk's sentimental Korean War tale of guilt and redemption is a weak, uncharacteristic film of the famed director, but it's worth seeing as a panel in his many collaborations with star Rock Hudson.

At best it's a serviceable war drama, that if it were not in Sirk's capable hands would have probably suffered an even more disastrous fate.

There are no featured reviews for Battle Hymn at this time.