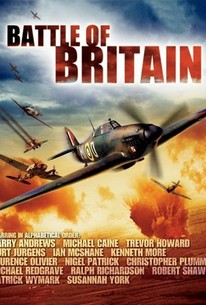 In this episodic, all-star film, no one star dominates the proceedings, though Sir Laurence Olivier, as flight commander Sir Hugh Dowdling, comes close. In Longest Day fashion, the film pays tribute to other nationalities instrumental in fending off the waves of Luftwaffe planes, notably the expatriate Polish and Czech pilots.

Rolf Stiefel
as Hitler
View All

Critic Reviews for Battle of Britain

There are so many characters we never get involved. We can't even keep them straight. The writers never solved the problem of incorporating the top-heavy special effects into their thin little plot.

This 1969 big-budget extravaganza is noted for its realistic recreations of aerial WWII dogfights.

Succeeds in giving the general impression of a pivotal historical moment, and excels in crafting some of the most astonishing aerial-warfare sequences ever put on film. [Blu-Ray]

An all-star ensemble cast consisting of the who's who of British films can't save the war epic from being a bore.

Audience Reviews for Battle of Britain

Battle Of Britain is an excellent recreation of the Battle Of Britain of 1940. A superb film with terrific talent and directed by Guy Hamilton who made a name for himself by a directing four James Bond films. Battle Of Britain is a strong war film about one of Germany's greatest defeats. With the Battle Of Britain, the good fortune of Nazi Germany slowly took a turn for the worst, and the seemingly invincible German forces started facing defeat. Guy Hamilton's film is superb, the acting is so-so. But the aerial sequences are intense and well coordinated. In fact, some real planes of the war where used in the making of this film. The dog fights are well done, splendidly filmed. I don't understand why this film has gotten bad reviews. Because after all, it's fairly authentic and accurate at depicting this glorious victory of Britain over Nazi Germany. Battle Of Britain is one of the films to feature aerial combat . This is one of the strongest points of the film, and despite the decent acting, this film is still very much phenomenal due to the fact that it's great to see this impressive battle come to life on screen. Also, the film may spark interest for people wanting to read more on the war, and on this battle that changed the course of the war. All of the cast involved are good enough, but this is a film that focuses more on the battle itself, and less on the acting, and it's one of the reasons why this film is so terrific. Like many critics have said about this film, this film features the best aerial fighting sequences ever filmed. Sequences so exciting and so thrilling that not even modern day Hollywood films can top this film. Battle Of Britain is a unique film and an important look into one of Britains greatest victories during the war. A film thats also a must see for every history buff. Only people who want action packed non stop films like Iron Eagle and Top Gun, will hate this film. Because this is history, The Battle Of Britain really happened, and theres nothing boring or uninspired about this film. Great story, decent acting and phenomenal aerial combat scenes make this, THE air combat film to see. A classic. Plus it has something that Top Gun doesn't have, accuracy.

This picture directed by Guy Hamilton of some of the James Bond movies left me disappointed. A couple of the same men to appear about a decade later in A Bridge Too Far are present again (Caine, Olivier, and Fox). A couple other faces stand out a little (Howard, Plummer, Shaw, and York). It really doesn't matter though because the characters are so under defined. I don't have any military experience let alone flying experience. I expect that anyone who does might enjoy this movie more. But I thought it was seriously lacking in the narrative or drama department. There was almost no development of the characters to give the audience reason to care for anyone. At least it was a WWII movie that had a major female character in the service with York. And it tried to give equal time to the German air force preparing to attack England. At least there was that. Hamilton and the producers ended up intricately recreating the battles in the air. It is one big reenactment! However, it becomes about showing off the fire and explosions and some maneuvers. They expected that the pure drama of the historical event would be enough to hold the audience's attention, but it wasn't for me. I was jumping to extremes when I thought that A Bridge Too Far made it too difficult to identify the actors and what was happening some times. When you hardly have time to get to know the characters and their personalities, try recognizing who is who with fighter pilot goggles and hoods and radio/air masks! And I had a bloody hard time telling which were the German planes and which were the British planes in the heat of battle! I guess I'd be no good serving in the air force. The making-of docs were more interesting in explaining the uses and challenges of the planes. One that I can't find on IMDb (hosted by Michael Caine) does a clearer job explaining the history with occasional clips from the movie and archival footage to show who was involved.