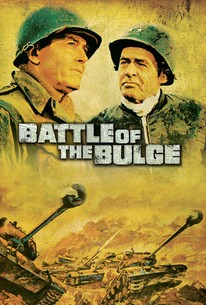 Battle of the Bulge Photos

Certainly not a documentary, this film travels pretty far from the actual historical recountings of the famed battle. However, it does contain exciting battle scenes. The plot involves a U.S. Colonel (Henry Fonda) who strongly suspects that the Germans are preparing for a major offensive, but he's unable to convince his superior officers. Of course as history has it, the battle does ensue and the largest portion of the film relates to the action surrounding the battle. Originally produced in Cinerama, the video version can't quite project the intended big-screen effect, It is also 23 minutes shorter, losing some important footage in this cutting. Still, this is a WW II film that most war-movie fans will want to see.

Critic Reviews for Battle of the Bulge

The most harrowing sequences in the show occur at the beginning and the end... It's the two-and-a-half hours in between that are the problem.

when all the dust settles, Battle of the Bulge is a really long, really talky movie

Precise, compelling tale of one of WWII's biggest battles.

Unfortunately, the camera work and thrilling staging of the battles are betrayed by a screenplay that looks as though it were assembled from bits and pieces of old war movies and maybe a western or two.

Audience Reviews for Battle of the Bulge

Even with a ton of star power and a solid begining and ending, the film is a slow paced and boring mess between them. The film slogs on not doing much and really is a letdown from the good start of the film.

While not quite in the same league as the greatest war epics (such as the brilliant Patton), Battle of the Bulge is still a solid all around showing. Historical inaccuracies aside, the cast is strong, and the characterizations are especially well done, particularly with Robert Shaw's character, showing a willingness of the film to try and show some complexity of the conflict. This, combined with clever humor and good action make it a strong classic war film.

A WWII story that is interesting more for it's characters rather than the visual spectacle of the battle itself. Several sub-plots are interlinked involving Nazi spies posing as allied soldiers, a race against time to prevent the germans reaching a fuel depot, a self centred operator's redemption and philosophical musings about the nature of war and the individuals who fight it. The many stories don't quite hang together as a whole, but Robert Shaw steals the movie as the cold-hearted professional soldier who commands the german tank column.

Battle of the Bulge Quotes