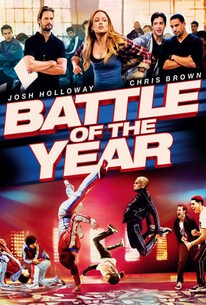 Critics Consensus: With a hopelessly hokey plot and unintentionally hilarious dialogue, Battle of the Year is flimsy even by the standards of the dance movie genre.

Critics Consensus: With a hopelessly hokey plot and unintentionally hilarious dialogue, Battle of the Year is flimsy even by the standards of the dance movie genre.

Critic Consensus: With a hopelessly hokey plot and unintentionally hilarious dialogue, Battle of the Year is flimsy even by the standards of the dance movie genre.

Battle of the Year Photos

Battle of the Year is an international dance crew tournament that attracts all the best teams from around the world, but the Americans haven't won in fifteen years. Los Angeles Hip Hop mogul Dante (Alonso) wants to put the country that started the Sport back on top. He enlists his hard-luck friend Blake (Holloway), who was a championship basketball coach, to coach his team. Armed with the theory that the right coach can make any team champions, they assemble a Dream Team of all the best dancers across the country. With only three months until Battle of the Year, Blake has to use every tactic he knows to get twelve talented individuals to come together as a team if they're going to bring the Trophy back to America where it started. (c) Screen Gems

Critic Reviews for Battle of the Year

The young dancers' undeniable skill and athleticism is squandered in this formulaic, overly familiar dance movie.

In particular, as mentioned, the dance sequences are a mess, which is the kiss of death for a film in this genre.

its dramatization of a U.S. dream team's journey to the international showcase is leaden with predictable character types and storytelling clichés, neither of which its well-executed but oddly infrequent dance sequences are able to overcome.

The bar for urban-flavoured dance movies has already been set pretty low, but Battle Of The Year effortlessly leans back and limbos on below it.

The actual dancing scenes are occasionally electrifying, if far too sparse, but other than that and the welcome sight of co-star Chris Brown getting clocked in the face, the film barely gets off the ground, much less sticks the landing.

Instead of allowing his film to be uplifted by dance, Lee burdens it with a cringe-worthy dramatic narrative.

Proof that any movie can get made somehow.

Characters are not developed enough. You don't feel for them. Result being, you end up as mere spectators instead of well-wishers. While the film preaches 'passion' for whatever you do, it is exactly what seems to be missing from it.

Renuka Vyavahare
The Times of India

Not only does it fail to use 3D, with its rapid edits, but the dramatic stuff is poorly edited and sound mixed as well.

Despite the reasonable dancing scenes and passable acting by singer Chris Brown, Battle Of The Year is a string of clichés, stock characters and unbearable melodrama.

Even when a dance movie is following the formula as closely as Battle of the Year does, occasionally something you won't get to see anywhere else slips through.

Audience Reviews for Battle of the Year

There are no featured audience reviews yet. Click the link below to see what others say about Battle of the Year!

Battle of the Year Quotes