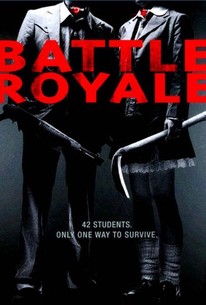 A long-unavailable underground hit that anticipated The Hunger Games novels by eight years, veteran director Fukasaku's epically violent, still-controversial and deeply influential genre masterpiece takes place in a dystopian alternate universe. In the near future, the economy has collapsed, unemployment has soared and juvenile crime has exploded. Fearful of its nation's youth, the Japanese government passes The BR Law: Each year, a 9th grade class is sent to a remote island where they will be locked into exploding neck collars, given a random weapon, and forced to hunt and kill each other until there is only one survivor left. Battle Royale follows one such class, with an ice-cold performance from Takeski Kitano as the group's teacher. -- (C) Anchor Bay

Masanobu Ando
as Kiriyama
View All

Stylistically it's a beauty, with khaki-uniformed waifs fighting for their lives to a crashing classical score.

Awful deaths (and hysterical reactions to them) punctuate declarations of love and friendship, revelations of treachery and heavily armed expressions of angst.

Forgive the film its small flaws of histrionic performances and cheap execution for the giddy rush of its banal, Verhoevenesque atmosphere...

It may suit a certain worldview, but Battle Royale's cynicism is still a form fantasy-a balm as well as a bomb.

Maybe Battle Royale's ultimate punchline is its inexplicable ability to fool some people into taking it seriously.

The last half hour is the most successful, a final interlude of generational warfare, then radical anonymous freedom.

Battle Royale is above all a high-concept, action black comedy. Beat Takeshi's performance as Teacher Kitano is one for the record books...

Not a face value film, it leaves its audience questioning, reflecting, and debating its hauntingly resonant implications.

You would never suspect that a 70-year-old man made this film: it positively hums with youthful lust and rage.

This savage social satire revels in the brutality and gore and plays it for dark comedy and gallows humor, a teen melodrama gone feral as cliques fall apart under fire and young love is literally under the gun.

Before The Hunger Games there was Battle Royale. The bloody spectacle of Japanese schoolchildren being forced into a sadistic game of "last man standing" packs an emotional wallop.

If you've seen The Hunger Games, forget all of it and get yerself strapped in for oneupsmanship on a grand scale. This has got better writing, better acting, better everything on steroids. Just one action film with balls.

Way better than The Hunger Games.

Battle Royale has impressed many and is loved by a lot. I must have missed something. I liked the concept of the film and enjoyed some it. But I guess what really put me off was some of the dialogue and some of the acting. It was just too cheesy for me. I couldn't get passed it. Plus a lot of the gory parts looked really fake. I know they are but you want it to at least look realistic. It just wasn't a movie for me.

'Battle Royale' is clearly a huge underground hit for many good reasons, even if the acting is a little poor from the young students. Kitano gives a great performance however, and the pace is brisk while the violence is plenty. The film most superbly succeeds in its a production design and atmosphere whilst being a social commentary that is pretty poignant. The teenage drama is a little soapy but its easy to forgive their performances, seeing as the film in its entirety is extremely potent. 'Battle Royale' is definitely recommended for any Tarantino fan or someone looking for an original viewing experience because yes, this film was made before 'Hunger Games' was even written. The similarities may be uncanny, but this vision of teens fighting to the death makes for a better production.