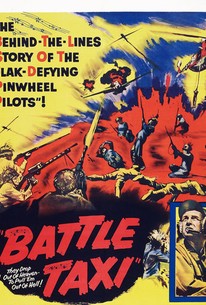 Battle Taxi is set during the height of the Korean War. Sterling Hayden plays an officer of the Helicopter Air Rescue Service, whose job it is to save wounded or stranded soldiers from hostile territory. Arthur Franz costars as a lieutenant assigned to the copter service, who at first resents his position but eventually realizes his importance in the scheme of things. The film sticks to basics, eschewing any and all romantic subplots -- in fact, there isn't a single female character in the picture! ~ Hal Erickson, Rovi

There are no critic reviews yet for Battle Taxi. Keep checking Rotten Tomatoes for updates!

There are no featured reviews for Battle Taxi at this time.