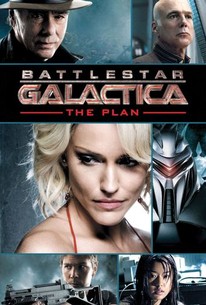 Edward James Olmos directs this feature-length drama that tells the story of the Peabody-winning series -- from the perspective of the Cylons. Battlestar Galactica: The Plan finds man's creations plotting to destroy their makers, but when their genocidal scheme leaves survivors. Now, two Cylons must try to eliminate the remnants of humanity, while Adama (Olmos) and his fleet struggle to survive. From the nuclear devastation that began the miniseries to Sharon's (Grace Park) attempt to kill her commander, all the show's biggest moments are seen from the enemy's point of view. The film also stars Tricia Helfer, Michael Hogan, Dean Stockwell, Michael Trucco, and Aaron Douglas.

Alisen Down
as Jean Barolay

Rick Worthy
as Simon
View All

I think "The Plan" is destined to be the kind of thing that nobody but [Battlestar Galactica] completists will want to own.

I found the movie to be a piece of brilliant writing because it managed to retrofit a neat little story arc into an existing series.

... neither sequel nor prequel to show but an imaginative bookend, a retelling of the saga in digest form from the Cylon perspective.

A labor of love...so it's appropriate that the film should also be about love, the spanner in the works that allows humanity to triumph over machinery. [Blu-ray]

Even if showing more of the cylon attack on the 12 colonies, this fragmented and unnecessary BSG movie doesn't add anything new or relevant to the completed series and also relies on many flashbacks of scenes that had already been shown before.

If The Plan is the last of the re-imagined Battlestar Galactica that we'll ever see, does it complete the series in a bang, or a whimper? I'd say somewhere between the two. Where Razor was a fun side-story that added some welcome, but unessential details to the Battlestar Galactica cannon, The Plan is really nothing more than a retelling of the majority of the story, from the Cylon's point of view. Specifically, the points of view of two Cavil's and two Simon's. We get a few answers during the movie that explain some minor, niggling questions, and those were pretty cool. But everything else is either just a review of events that were driven by the Cavil's, outside of our knowledge, a few scenes that more fully integrate the Final Five into the earlier parts of the series, or a look at the experiences that the two Simon's had with the humans that they were close to. One's and Four's are among my least favorite Cylon models, so I can't say that I was exactly thrilled that they were the focus of the majority of the story. But I did feel like I knew more about the Cylons and the mythology of the series after I watched it, so it was worthwhile for me. I'm not going to complain about any new BSG, and getting to see some of my favorite characters one last time was worth the price of admission, by itself. Just look at it as a long recap episode with some never before seen footage, and you won't be disappointed. Razor was better, but The Plan serves its purpose somewhat well, and its a bittersweet final entry for anyone who's a fan of one of the best TV shows in years.

Generally, Battlestar Galactica's off-series output doesn't tend to be all that strong. Though The Plan is wise to focus on Cavil, one of the show's most interesting unexplored characters, he's stranded amidst a bunch of exposition and plot retreading. This movie basically amounts to a bunch of sinister Cylon cackling and a decent thematic arc about how circumstance shapes a person (or cyborg, as it were); marginally compelling if you're a big fan of the show's excellent writing, but not so much if you're in it for the space explosions or high drama. Another pleasant surprise is the movie's choice to flesh out Simon, most commonly known as That Black Cylon Who Doesn't Do Anything, and Rick Worthy's sharp performance leaves you feeling a little disappointed that he wasn't more prominent in the series. There are a few great character moments to be found in here, and again, you're not going to go wrong with Cavil, but this is unabashedly a fringe retelling of the plot communicated through several of Galactica's little-seen characters. Massive disappointments: no new Starbuck; no Roslin at all; about two minutes of Ellen, Adama, Tigh and Tyrol; extensive focus on boring Anders; and a frustratingly common use of archival footage to fill in the gaps for viewers who haven't watched the first two seasons in a while. About a third of this movie is taken directly from the series itself, partially to keep fans in the loop but likely because this didn't have much of a budget. Concurrently, there aren't any world-shattering revelations for fans of BSG found in The Plan, but it's an entertaining movie nonetheless and an extra two hours spent with some of the most sharply written characters in science fiction.