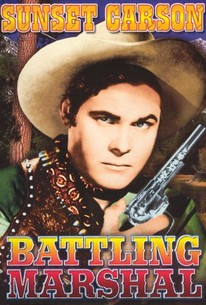 After wearing out his welcome at Republic Pictures, cowboy star Sunset Carson signed a contract with Walt Maddox's bottom-barrel Sunset Productions. Battling Marshal is no better or worse than the rest of Maddox' films, which generally looked as though they were filmed in someone's back yard with a Bell and Howell 8-millimeter camera (actually, the film stock used was 16-millimeter, blown up to 35 mm for theatrical showings). In this one, lawman Carson makes an error in judgment in the first five minutes of the film, then spends the next 50 minutes redeeming himself. Carson's leading lady is Pat Starling. Battling Marshal was lensed on location in Texas.

There are no critic reviews yet for Battling Marshal. Keep checking Rotten Tomatoes for updates!

There are no featured reviews for Battling Marshal at this time.