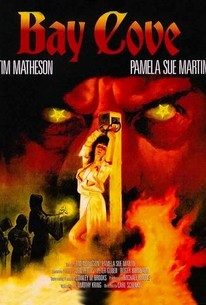 This slow-moving occult thriller has Pamela Sue Martin and hubbie Tim Matheson menaced by a coven of witches when they move to an island off the coast of Massachusetts. Director Carl Schenkel -- who went on to make the interesting Knight Moves -- does the best he can with a tedious script and a lot of miscasting, but it doesn't make the movie any more interesting. It looks like a who's who of '80s sitcoms, with Woody Harrelson, Jeff Conaway, and Inga Swenson along for the evil doings, but some viewers will be rolling on the floor when they see Leave It to Beaver's Barbara Billingsley as a 300-year-old witch. The highlight of the film is an exploding church, which may just be loud enough to wake you up so you can rewind the tape.

James B. Sikking
as Nicholas Kline

Michael Caruana
as The Priest

There are no critic reviews yet for Bay Coven. Keep checking Rotten Tomatoes for updates!

There are no featured audience reviews yet. Click the link below to see what others say about Bay Coven!