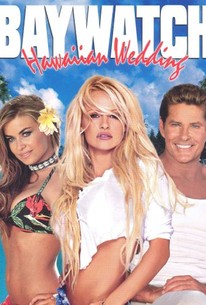 Fans of the old Baywatch TV series take heart. Despite all evidence to the contrary, legendary lifeguard Mitch Buchannon (David Hasselhoff) was not killed in that explosion during the series' final season. Instead, he has been suffering from amnesia for the past three years, and has now re-emerged from the shadows with a stunning new fiancée in tow. The lovely Allison bears an astonishing resemblance to Mitch's long-dead sweetheart, policewoman Stephanie Holden -- as well she may, since Allison is also played by the series' Alexandra Paul. Virtually all of the old Baywatch regulars gather together for the lavish wedding of Mitch and Shannon in Hawaii, little suspecting that Allison is actually in league with an old enemy of Mitch's who has set his cold, black heart on a horrible revenge. Is there anyone in the wedding party who will step up and rescue Mitch from certain doom? Perhaps his ex-wife Neely Capshaw (Gena Lee Nolin), or the still beautiful, incredibly pneumatic Casey Jean Parker (who else but Pamela Anderson)? The sort of TV-movie fare for which sweeps weeks were invented, Baywatch Hawaiian Wedding made its Fox network debut February 28, 2003.

The joke is that Baywatch is so melodramatic and overwrought that any guys who watch it looking for titillation end up exposing themselves to soap opera.

There are no featured audience reviews yet. Click the link below to see what others say about Baywatch Hawaiian Wedding!