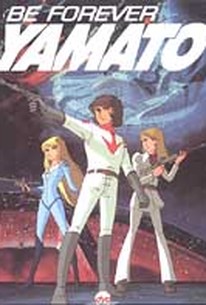 The saga of the Yamato continues as the crew attempts to pass through an unexpected time warp in a desperate attempt to defeat the Black Nebula Empire and save Earth from total annihilation. When the crew of the Yamato passes through the Black Nebula in an attempt to confront their mortal enemy on their own turf, they suddenly find themselves thrust 200 years in the future. Despite discovering that mankind has suffered a crippling defeat, the crew makes one final, desperate effort to go back in time and prevent history from taking a particularly dark turn. ~ Jason Buchanan, Rovi

Critic Reviews for Be Forever Yamato

There are no critic reviews yet for Be Forever Yamato. Keep checking Rotten Tomatoes for updates!

There are no featured reviews for Be Forever Yamato at this time.