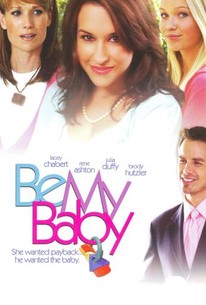 A single woman sick of being deceived by philandering married men finds her fool-proof plan for revenge backfiring in a way she never anticipated in a romantic comedy starring Lacy Chabert and Julia Duffy. Rylee is a trusting woman who has been taken advantage of by too many married men. In a bid to get back at the male species, Rylee purposefully gets a married man drunk and tricks him into believing that they have had a one-night stand. Twelve months later Rylee shows up on his doorstep holding a baby and demanding blackmail money. Though Rylee's ruse works the first time, it soon hits a hitch when she accidentally scams a single man who genuinely wants to care for the couple's alleged newborn child.

Sue Nelson
as Danette
View All

Critic Reviews for Be My Baby

There are no critic reviews yet for Be My Baby. Keep checking Rotten Tomatoes for updates!

Audience Reviews for Be My Baby

Be My Baby Quotes