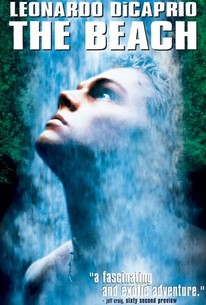 Critics Consensus: Critics say The Beach is unfocused and muddled, a shallow adaptation of the novel it is based on. Points go to the gorgeous cinematography, though.

Critics Consensus: Critics say The Beach is unfocused and muddled, a shallow adaptation of the novel it is based on. Points go to the gorgeous cinematography, though.

Critic Consensus: Critics say The Beach is unfocused and muddled, a shallow adaptation of the novel it is based on. Points go to the gorgeous cinematography, though.

For his first major project after the overwhelming success of Titanic, Leonardo Di Caprio took a risky path in this adaptation of Alex Garland's acclaimed novel, directed by Danny Boyle. Richard (Di Caprio) is an American backpacking through Asia with a handful of friends from Europe. While in Bangkok, he meets a mad Scotsman who calls himself Daffy Duck (Robert Carlyle). Shortly before Mr. Duck kills himself, he gives Richard a crude map to a place in Thailand that he claims is paradise on earth: beautiful, unspoiled, and uninhabited. For lack of anything better to do, Richard and his companions try to locate the spot, which, after a dangerous and taxing journey, takes them to a beach as beautiful as Duck said it would be. Richard and his friends settle in, but before long they discover that they are not alone; a large group of fellow travelers has already dug themselves in, and they have established a community with the same social evils that Richard was hoping to leave behind. Just as important, there is an army of natives who grow marijuana in the nearby hills and do not appreciate the presence of these visitors. The Beach proved controversial during production, partly due to production delays and shifting release dates, partly due to environmental concerns after crew members bulldozed parts of the Thai island of Phi Phi Le for the planting of non-native trees. ~ Mark Deming, Rovi

News & Interviews for The Beach

View All The Beach News

Critic Reviews for The Beach

A narrative that tries to juggle thriller elements, tons of pop culture imagery, and way too much philosophical baggage.

The Beach is nothing to write home about, though the landscapes are ravishing. The movie itself is neither fish nor fowl.

In pitching for the mass market, Boyle's film has allowed itself to be rebranded as a Hollywood star vehicle, a cynical assemblage that is never more than the sum of its market-researched parts.

The Beach, designed to provoke audiences, stops for too many Hollywood moments to get the job done.

The Beach wears its self-importance on its sleeve, but never truly earns it.

You'd probably call it a strange brew of Fantasy Island, Apocalypse Now and Lord of the Flies. But whatever it is, it certainly is an intriguing and utterly watchable concoction.

By attempting to combine elements of mystery, adventure, action and romance, 'The Beach' becomes too jumbled to follow with much interest.

A brilliant example of changing the material to suit the medium without losing the message.

While it thumped along, I had plenty of time to ponder the other and better movies that it reminded me of.

Audience Reviews for The Beach

The visuals are jaw-dropping and the idea is promising, but the film is irregular and shoots in every direction without managing to fully explore the possibilities of its premise, remaining a lost opportunity to show how paradise is not really about a place but the people living in it.

Excellent story with breathtaking scenery set in Thailand. Leo's character Richard is an American tourist who embarks on an adventure to find a paradise island. But at what price? My favourite scenes are when Francoise pretends to be eaten by a shark, when they debate how they are to get down from the waterfall and the scene where they are together in the water. Excellent cast and soundtrack. Directed by Danny Boyle.

The film goes all over the place and in the end barely saves itself. The acting is good but nothing special and Boyle's directing wasn't exactly there. More of an exercise with a big budget, Boyle uses new techniques to grab our attention but ultimately leaves most viewers unsatisfied.

This is the film adaptation of a novel about an American (British in the novel) backpacker named Richard traveling through Thailand to see the world and experience new things. Richard is getting fed up with the way the world has become, and, as luck would have it, he gets word of an oft talked about secluded island paradise off the Thai coast that few people know about, especially how to get there. It's the stuff of legends, but one day Richard meets a disturbed Scotsman named Daffy who tells him the island and its beach are real, and gives him a map to it before committing suicide. Intrigued, and with nothing better to do, Richard meets up with a French couple and the three of them set out to find the isalnd and its beach, to see if maybe it really is thing they've all been looking for. They do manage to find it, but quickly learn that dreams of reaching a paradise are best left as dreams. As a concept and a novel (I'm guessing, since I haven't read it). the scenario here is wonderful and works quite amazingly. With how it is done in this film however, it falls short of greatness and could have used some work. It does have some good things going for it though, so, even though I wanted more, I liked this enough to give it a pass. This film was a bit of a rough transition period of DiCaprio. He had yet to shed the image movies like Titanic and Romeo + Juliet had given him, and he doesn't quite suceed at disposing of it here. He does decent enough, though I think diertor Danny Boyle's go to guy Ewan McGregor would have been a better fit. It's just too bad he and Boyle got into a dispute and the studio basically forced DiCaprio into things. Like I said, he's okay though, even though I think this character seems a little "typical" or obvious for someone like him. Tilda Swinton does a good job as the bigwig in paradise though, and Robert Carlyle does his thing as Daffy. This film skirts around elements of subtext and deeper themes and messages, but mroe often than not, the focus is on hedonsim and half baked idealism. I know Boyle is a smart and talented filmmaker, so I'm not sure if he just didn't give a shit here, wanted to lighten it up, or if the studio was responsible. At least the film touches upon thigns even if it doesn't totally expound upon or focus on them like I hoped for. Look, this film is flawed, and I am being pretty kind to it, but it isn't boring, and the music is nice too. The best things going for it, as you might have guessed, are the location shooting and the cinematography. This film picked a great place to shoot at, and the results don't disappoint. The landscapes look awesome, and even the scenes on the mainland really come alive. It just kinda sucks that the film sirals out of focus now and then. I'm okay with showing descents into madness, and bringing odd hallucinations to life, but the madness thign has been done far better, and I was easily reminded me of that since this film not so subtly features Apocalypse Now. Also I get why they have the video game sequence, but it just comes off as silly. So yeah, I'm letting myself get won over against my better judgment, but look, I did address the issues I have, and I think I gave a pretty balanced account of things. I like this kind of movie, and it at least put forth some effort to be good, even if it didn't totally succeed.