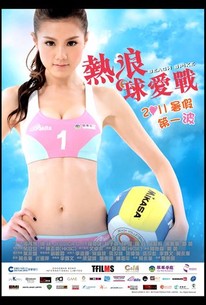 There are no critic reviews yet for Beach Spike. Keep checking Rotten Tomatoes for updates!

There's one big reason to watch Beach Spike, and that's if you want to see some attractive Asian girls in bikinis playing volleyball, often in slow motion. It does that very well: the rest is a mixed bag. The movie tries to be be a romance/comedy/sports hybrid, a bit like Shaolin Soccer. Unfortunately, it's mediocre in almost all those areas. Especially the action scenes and volleyball matches, which should be the highlights of the movie. The women look great, but it's also obvious that they're not the volleyball experts that their characters are. Most of the matches look extremely staged and choreographed, though the final one is pretty intense. The story, about two girls playing to save their beach from being closed to build a resort, often strives to be sentimental, exciting or amusing, but the writing for the characters is so thin that all that tugging at our emotions just doesn't do much. Still, Beach Spike is mostly light, fun, and very easy on the eyes. I finally got invested in the characters a bit at the end, and the predictability and slightness of the plot just didn't matter much anymore. Or maybe I was just distracted by how pretty Chrissie Chau, Theresa Fu and Jessica C. were. Take it for what it is, and Beach Spike isn't that bad. If you're not watching for the eye candy, you won't find much to keep your interest.

Tony Tang's Beach Spike has enough to span multiple genres; however, it never excels in any category to be a stand out film.

Now, onto the volleyball segments which are the highlights of the film. It isn't because they are well constructed matches. More than half the time, along with a CG ball floating over the net, things are shot in slow motion. It is these slow motion scenes, however, that stand out. Why? Because there are four sweaty young ladies diving around in bikinis. Cliched, but talk about eye candy.

There isn't much to the acting or even the characters. Everything good ends up with Chrissie Chau, Theresa Fu, Jessica Cambensy, and Phoenix Chou going at it on the sand with a net and volleyball.

Beach Spike has got the ladies, beach volleyball, and even some martial arts. All that still isn't enough to sit through 95 minutes for. Too bad.