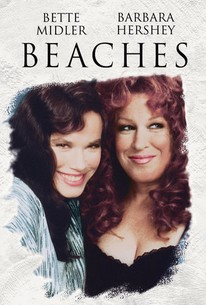 Based on a novel by Iris Rainer Dart, Beaches traces the 30-year oil-and-water friendship between free-spirited Bronx Jew CC Bloom (Bette Midler) and uptight San Francisco WASP Hillary Essex (Barbara Hershey). The two meet as children in Atlantic City (played by Mayim Bialik and Marcie Leeds) and are reunited in the 1960s, when CC is a struggling singer and Hillary is trying to break free from her staid upbringing by becoming an activist. The two ladies room together, then fall out when both are attracted to off-Broadway producer John Pierce (John Heard). CC wins John, but she quickly outgrows him as she matriculates into a bawdy performer. The recently patched-up friendship between CC and Hillary is torn asunder again when Hillary and her new husband express distaste for CC's performing style. Comes the 1970s, and CC and Hillary are reunited after shedding their respective spouses. Broke again, they once more become Manhattan roommates. Their bond strengthens, but there is tragedy in store for the duo.

Frank Campanella
as Frank the Doorman

Nicky Blair
as Tavern on the Green Maitre d'

Lori Marshall
as Tavern on the Green Patron

Harvey Keenan
as Man in Bagels

Barbara Hershey is wasted in a boring role.

Beaches epitomises the sort of triple-strength, three-hankie work you can expect from American women with three names and gives the lie to those who thought they stopped making women's pic heartstring-tuggers.

Beaches is bloodless, and Garry Marshall's direction, which might have given it style, is completely competent and entirely without personality.

For all of its insistence on the open, even gushing, expression of feeling, Beaches finally seems a little bit sneaky.

The film's oily overdefinition of various class and cultural categories is strident enough to betray a condescending attitude toward the audience.

I prefer Midler in these sorts of roles.

Beaches celebrates our friendships. And it's not afraid to be schmaltzy.

You've seen this four million times before but not with Midler wisecracking and singing and shaking her way through a whole movie -- or with Hershey as a pulp vision of monied beauty.

Beaches, despite its flaws, delivers an appealing message on the enduring quality of friendship.

As a film, Beaches is a contradictory mishmash of moods and intentions. However, the movie's weaknesses are the record's strengths.

This drama is at its best when Midler gives free rein to her character rather than when it slips into schmaltz.

I found the friendship was really weird to be honest, more like a old married couple, that turned into whose cock is bigger slagging match. I did enjoy this movie, i loved the songs and i loved the cast. It was a funny sad drama of friendship that was really captivating. I'd say it is one to watch.

Such awful, awful melodrama, but I love it! DID YOU EVER KNOW THAT YOU'RE MY HEEEEROOOO?

this is my mom's favorite movie. she LOVES bette midler, which i find weird because bette midler always plays really angry women who are totally dislikable. anyways, this movie is quite touching and i'm pretty sure this guy directed princess diaries (?) which wasn't good but this one is. gets a little sappy (or, VERY sappy) but it's a very nice story about best friends and i'm sure everybody has heard the hit "wind beneath my wings". really good songs too, from the riotous otto titsling to the bluesy i've still got my health to the classic under the boardwalk.