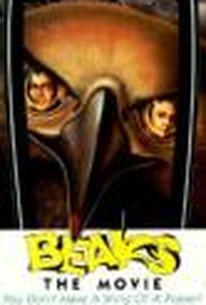 Spanish hack Rene Cardona, Jr. (of Aztec Mummy fame) directed this gory rip-off of The Birds (not a parody as its goofy title suggests) which follows a reporter/photographer team (Michelle Johnson & Christopher Atkins) as they investigate frequent reports of lethal bird attacks on humans. They eventually conclude that the attacks -- which are increasing in size, frequency and severity -- are part of an orchestrated avian plot against mankind. They could have saved themselves a lot of trouble by screening Hitchcock's classic chiller beforehand, just as viewers expecting a spoof of that film can save themselves the grief of enduring this bloody exercise, which pulls no punches in its graphic depiction of flesh-rending bird attacks. Gore-hounds should approve, as the makeup effects are painfully convincing, but die-hard Cardona fans may be disappointed to learn that no lady wrestlers actually step in to swat at the winged tormentors. ~ Cavett Binion, Rovi

May Heatherly
as Olivia

Peter Campbell
as Nick The Pimp

Linda Elder
as The Woman

Wes Friesen
as Cop Who Dies

There are no critic reviews yet for El ataque de los pájaros (Beaks: The Movie). Keep checking Rotten Tomatoes for updates!

There are no featured audience reviews yet. Click the link below to see what others say about El ataque de los pájaros (Beaks: The Movie)!