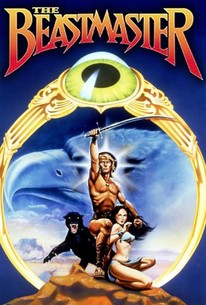 The Beastmaster, a young hero with the ability to communicate with animals, vows to avenge the death of his father in this sword-and-sorcery adventure. During his quest for the villain responsible for his father's death, he overcomes numerous challenges and finds romance with a slave girl.

Janet de May
as Witchwoman #1

Critic Reviews for The Beastmaster

In its attempt to outdo every other fantasy epic to date, culling pieces from everything in the last decade, it manages only to be one of the more forgettable of the genre.

The Beastmaster is a film shot through with love for the genre.

A kid-friendly version of Arnold Schwarzenegger's grown-up guilty pleasure... which really sort of misses the point.

Extra goofy, but basic cable couldn't survive without it.

An OK time killer when I was 11 years old.

What The Beastmaster lacks in lustre and expense, it more than makes up for in sheer "guilty pleasure" enjoyment.

Audience Reviews for The Beastmaster

The Beastmaster is an above average entry in the sword and sorcery stakes. Released around the same time as the influential (and even better) Conan The Barbarian, Don Coscarelli's fantasy film moves along at a rapid pace and has some memorable and imaginative sequences. I saw the film for the first time when I was a 10 years old, and watched it many times on video and cable. Evil priest Maax (Rip Torn) orders the sacrifice of his king's unborn son in order to prevent the coming of a prophecy in which the said son grows up and slays him. However, the baby survives its fate and is rescued by a farmer who raises him as his own and names him Dar. As Dar grows into adulthood (the adult Dar being played by Marc Singer), he gradually discovers that he has bizarre powers, including the ability to communicate with animals. He also is trained by his adopted father into becoming a very skilled swordsman. Dar's village is destroyed by a marauding band of raiders called the Juns, who kill everyone including Dar's adopted dad. Dar, the only survivor, sets off in pursuit of the Jun horde hoping to avenge their deaths. Along the way he gains several animal companions - a hawk, two ferrets, and a black panther - and also meets a slave girl named Kiri (Tanya Roberts) to whom he is immediately attracted. During his travels Dar eventually, almost accidentally, stumbles across the town where he was born. The king has long been imprisoned in the town's pyramid, and Maax is now in control, busily sacrificing the children of the repressed townsfolk. Dar vows to rid the town of Maax, but his plan is jeopardised following the rescue of the king.... for the king, during his years of imprisonment, has grown old and blind and, not realising who Dar is, refuses to take his advice on how best to confront Maax. Some of the sequences in the film have a really impressive, long-lasting level of invention. The sacrificial murder of a child thrown into a fiery pit; the eagle men liquefying a victim inside their rubbery capes; Dar pulling himself upside-down and backwards along a passage full of gauntleted hands that grab at his legs; the rather sad demise of one of the ferrets near the film's end. On the other hand, the performances (as noted already) are pretty bad. Singer is physically imposing but that's about all; Torn makes for a hysterically overblown villain; and Roberts struggles with even the simplest of lines (though she does LOOK terrific - and even has some skimpy costumes and a nude swimming scene to encourage us to forgive the amateurishness of her acting). Lee Holstridge provides an infectious score that sounds somewhat similar to the old Battlestar Galactica music. And John Alcott, the cinematographer, gives the film a visual polish that is probably a bit above the material. The Beastmaster is a guilty pleasure - lots of fun, lots of blood-spilling, lots of earnest enthusiasm all round.

I watched the Beastmaster Movie after the TV Series with Daniel Goddard and I have to admit. I rather stuck on the TV Series. The Movie is Horrible!

Yet another strangely addictive and well made fantasy film close on the heels of Conan. Singer is a much leaner barbarian and his animal abilities actually work well and dont stink of cheese like the crappy sequels. The good thing about BM is its very much a rip of Conan but actually much darker and quite sick in places, there are children burnt alive, drilling into peoples heads and some excellent monster creations in the bat like creatures that wrap their wings around you and reduce you to a pile of bones n goo haha brilliant imagination there. The creatures in the gimp style masks that have green eye are also quite eerie and send a shiver down yr spine as they roar and run after their victims, cheesey yes but at the time it was cool stuff, and it does still work today. Nice cast, well trained animals and a rough n sexy look make BM a worthy Conan adversary.