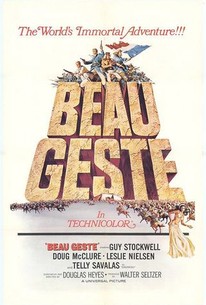 Christopher Wren's classic adventure story is brought to the screen for the third time in this version, which featured several popular television stars of the day. Beau Geste (Guy Stockwell) is forced to take the blame for a crime he didn't commit in order to protect the good name of his family; he and his brother John (Doug McClure) flee the country to avoid capture and join the French Foreign Legion. Under the leadership of the sadistic Sgt. Major Dagineau (Telly Savalas), Beau and John must battle Arab troops as they try to clear their names. For this more budget-minded adaptation of the story, the three Geste brothers were whittled down to two; Wren's story wasn't filmed again until Marty Feldman's send-up of the Foreign Legion epics, The Last Remake of Beau Geste, appeared in 1977. ~ Mark Deming, Rovi

Ava Zamora
as Dancer
View All

There are no critic reviews yet for Beau Geste. Keep checking Rotten Tomatoes for updates!

There are no featured reviews for Beau Geste at this time.