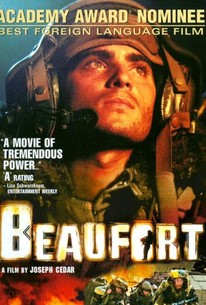 Not far from the old seafarer's fortress, Beaufort, is a military base with the same name kept by the Israeli army. This heavily guarded post has been here since the war in Lebanon in 1982. It is a symbol not only of Israel's most controversial campaign for military control of Lebanon, but also of a sacrificial struggle during which many soldiers lost their lives. The Israeli troops move out of Lebanon, leaving behind their base at Beaufort. On the evening of May 24th, the base is destroyed, blown up by thousands of mines. The powerful explosion marks the end of 18 years of Israeli occupation. The film tells the story of Liraz Liberti, the 22-year-old commander of Beaufort, and his troops during the last few months prior to their withdrawal. The story does not center on the war but on their retreat. The base is still under enemy fire as Liraz prepares to explode the site, thus destroying everything that his friends and comrades have died for trying to defend.

Nevo Kimchi
as Avishai
View All

Joseph Cedar, the director, obviously decided not to hold the audience's hand. This is good until you get lost; at which point you are less interested in the film and more interested in trying to feel for the hand that isn't there.

The soldiers feel stuck and so do we.

Clearly something has gone MIA in moving from the small pictures into a cohesive big one.

As long as soldiers have gone into battle they have struggled with the rightness of their actions and their purpose in the field -- no matter how firm their resolve at the outset.

The camera never leaves the beleaguered compound, and Beaufort itself becomes a character in the story, a surrealistic zone of tunnels, bunkers and sandbags, about as far from the possibility of heroism as possible.

There is no preaching or pontificating here, just young men with a lifetime ahead of them, forced to wait in hell while their fates are decided for them by men in air conditions rooms.

Cedar overcomes the generic characters and formulaic "which innocent will die next in an ironic twist" plotting by his attention to detail.

Powerful portrait of an officer and his soldiers facing up to what it means to serve in an army of a fallible, democratic country that spins an explosive pyrrhic victory

It doesn't come like a full-length, filmed history lesson at all. In fact, it's a pretty fascinating, sometimes disturbing tale about the emotional and physical toll of combat.

Engaging war drama that subtly mixes in several different genres to intriguing effect, though it occasionally relies too heavily on cliches.

The film is slow and rather too long (and a bit preachy), but always intense, and its intentions are certainly clear.

A fantastic offering from Israel depicting the comradeship between soldiers assigned to an isolated outpost in Lebanon. Director Joseph Cedar centers the focus on his characters by putting the camera right down in the trenches with them. Other than their mortars and missiles you never even see the enemy, increasing the sense of isolation and (sometimes) despair. A fitting tribute to the brave men who actually served at Beaufort.

A very sad true story of the group of soldiers that was left to guard a mountain fort during the Lebanon war, Beaufort gives you an utter feeling of hopelessness. Its filmed with fluid motion photography which at first makes you unsure whether this is a motion picture of a documentary. The movie begins in the middle of their service as new recruits come in and others finish their terms. They all discuss why they think they are there and whether or not they feel it is worth it to risk their lives for something they didn't even start. The movie is a psychological exercise of what is right and what is wrong which I always find worth seeing.

You almost want to characterize this as the live action version of Waltz With Bashir...in my opinion it is just as effective. A very appropriate picture given that another great troop withdrawal is soon upon us.

[font=Century Gothic]"Beaufort" takes place at a medieval fort in southern Lebanon which was captured by the Israeli army in 1982 in a controversial battle.(Years later, there are debates concerning whether an order to attack was ever given.) 18 years later and the war is winding down but hostilities have not quite ceased. To prove that point, Hezbollah have planted an explosive device on the road out. In response, the Israeli army have sent a bomb squad expert, Ziv(Ohad Knoller), to defuse and study it but he is not quite sure he can. Regardless, the commanding officer, Liraz(Oshri Cohen), strongly disagrees and wants the bomb removed anyway...[/font] [font=Century Gothic]"Beaufort" is a moving film about the futility of war against an enemy who is never seen, the soldiers never being allowed to patrol beyond the confines of their outpost.(The outpost itself is undermanned and mannequins are employed to fill in the gaps.) The movie perfectly captures the feel of combat which I have heard described as long periods of tedium, broken up by sheer moments of terror. But this is also where the movie stumbles badly by setting up a couple of manipulative and predictable sequences, topped off by a prolonged ending. In the end, there is something deeply tragic about a war started by one generation, only to be finished by the next.(Hopefully, this does not happen with Iraq.) [/font]