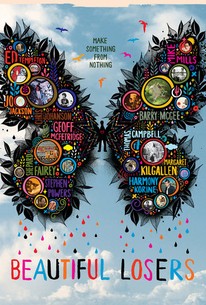 Critics Consensus: An insightful if fawning documentary that explores a group of 90s NYC artists.

Critics Consensus: An insightful if fawning documentary that explores a group of 90s NYC artists.

Critic Consensus: An insightful if fawning documentary that explores a group of 90s NYC artists.

Filmmaker Aaron Rose celebrates the independent spirit of D.I.Y. (do-it-yourself) culture in this documentary detailing how a group of like-minded American artists emerged from the underground in the early 1990s to have an enormous impact on the worlds of fashion, film, art, music, and pop culture in general. With virtually no connection to the mainstream art world, the ten artists featured in Beautiful Losers somehow managed to become the strongest creative voices of their generation. ~ Jason Buchanan, Rovi

As you watch the movie wholeheartedly and uncritically celebrate the group's "nonconformist" ethos (shouldn't someone gently break it to them?), you can feel the energy being sucked out of you.

Like the art scene it documents, Beautiful Losers is chaotic, anarchic, rambling and populated by charismatic freaks with statement T-shirts, complicated haircuts and impossibly rare trainers.

You can't help but feel like a bit of an eye-rolling parent, wondering if a few of them might benefit from a proper job and a light slap.

On your deathbed you will want back the time it takes to see this one.

One of the year's best documentaries.

The film's score, by Money Mark, is an entertainment in itself.

The whole ethos portrayed in this film seems to be of a tightly knit group, referencing and re-referencing each other ad infinitum.

A shamelessly self-promoting homage documentary to a like-minded group of rebel pop culture artists, who work together in a NYC collective but do independent work.

An amiable portrait of the artist as a scruffy slacker, and a useful jumping off point for anyone interested in investigating some of the cultural issues that marked the 1990s and the start of the new millennium.

The affection these people have for each other is what makes Beautiful Losers (the name is taken from one of their shows) so attractive.

Prioritising the self over the job means Beautiful Losers is rarely more than a compendium of loveliness and apology.

Interesting, but underwhelming documentary about art. Had some good things in it, and the artist interviews were enjoyable, but felt a bit lacking somewhere.

Documentary on a group of self-made artists in 90's New York and how their DIY mentality influenced the mainstream world of art and advertisting. As a fan of artists whose primary focus isn't to be as cool as humanly possible (cf most surfer dude documentaries) it was nice to see artists enthusiastically dissing their early works and emphasizing how nerdy they were, but it was hard to tell how they got from there to fame or indeed how famous they got to be. But there's a definitely charm in a philosophy that embraces all of us who still secretly like to "make stuff" at home.