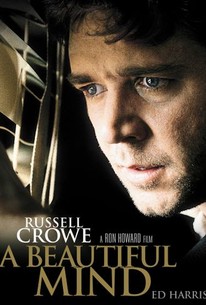 Critics Consensus: The well-acted A Beautiful Mind is both a moving love story and a revealing look at mental illness.

Critics Consensus: The well-acted A Beautiful Mind is both a moving love story and a revealing look at mental illness.

Critic Consensus: The well-acted A Beautiful Mind is both a moving love story and a revealing look at mental illness.

From the heights of notoriety to the depths of depravity, John Forbes Nash, Jr. experiences it all. A mathematical genius, he made an astonishing discovery early in his career and stood on the brink of international acclaim. But the handsome and arrogant Nash soon found himself on a painful and harrowing journey of self-discovery once he was diagnosed with schizophrenia. After many years of struggle, he eventually triumphed over this tragedy, and finally, late in life, received the Nobel Prize.

Amy Walz
as Blond in Bar

Will Dunham
as Pen Ceremony Professor

Bob Broder
as Technician
View All

News & Interviews for A Beautiful Mind

View All A Beautiful Mind News

Critic Reviews for A Beautiful Mind

Ultimately the message is banal and rather repellent: brainwork wrecks your health.

Crowe is called upon to do not much more than stare solicitously at the heavens, from where inspiration duly arrives, to the accompaniment of some predictably celestial music.

A Beautiful Mind is Howard's best movie, and easily one of the best movies of the year.

It's not a crime for the script to gloss over the thornier aspects of Nash's story, but the film seems totally unconvincing, squeezing a real life into a formula that's simultaneously more palatable and less interesting.

A Beautiful Mind is not an insult to the intelligence, not quite. But it makes every effort to celebrate that uncommon faculty and at the same time play it down to the lowest common level.

The result is one of the most successful attempts to make math look sexy, even if the movie strays - gallops, really - from the details of the actual life of Nobel Prize-winner John Forbes Nash Jr.

Nash's character is perfectly suited to Crowe's ability to charm and confuse at the same moment.

Its inspirational qualities to read more about the real John Nash (and all the things omitted from this biopic) might be the only lasting effect.

Granted, it's uplifting to see mental illness portrayed on the screen in a humane fashion and world-class intellectuals elevated to heroic status. But A Beautiful Mind feels contrived from beginning to end, a paint-by-the-numbers biography.

This is stirring and absorbing stuff.

Audience Reviews for A Beautiful Mind

A Beautiful Mind is definitely the type of movie that wins over the academy every year. They've always had a thing for heart string dramas, and while they don't always pick the best film per say, I truly believe this one deserved the win back in 2001. Many films grow a hatred after thet win awards, due to the fact that people now find them overrated, when they just didn't really think it was good enough to win. The term overrated is overused nowadays, but that's just my opinion. Happily, A Beautiful Mind is one of the films that I don't hear many complaints about as time as gone by. Sure, there are a few manipulative scenes and certain people who have direct relations to this film may not love it as much as some people, but I for one feel as though this film still stands as a masterpiece, and here's why. The watching this film for the first time, it feels like three completely different films throughout its three act structure. The first act feels more like it's going to be a movie in the same vein as Good Will Hunting, only to become a much more thrilling film, dealing with a nuclear bomb investigation throughout its second, eventually throwing the audience through a loop, making them wonder if anything they had just seen really happened at all. Once you've seen A Beautiful Mind, the surprises won't ever be there again, but the emotion is still very much present and worth watching over and over again. Russell Crowe is a revelation throughout this movie, plain and simple. Plain and simple, this film wouldn't have worked as well without a performance as devoted as Russell Crowe's. His mannerisms and the way he's able to fall in love with Alicia (Jennifer Connelly), is truly what transcends the film, making it as emotional as it is when the final act begins. His performances sucks you in from the very beginning and never lets you go, having you feel completely invested in this real-life character that had gone and still continues to go through this until the day the film was released. Across the board, this film is so well-acted, that it would've even been effective with a terrible screenplay, but that's just not the case at all. When it comes to screenwriting, it's very hard to make even the most realistic dialogue naturally flow as if you're watching something unfold in reality, but this is one of the few films that will always remain in my memory as a movie with a perfect screenplay. From the moments that need you to feel for each character in order to hold your interest, to the subtle moments that talk about love in great detail, to the seemingly overdone scientific subplots, once all is revealed in this film, everything falls into place perfectly, leaving nothing else to be desired, at least for myself. From performances, to superb direction by Ron Howard, to a script that will have those invested in tears, to a score that pulled me right into every moment, A Beautiful Mind won all of those awards for a reason. Looking back on this movie, nothing stands out as dated, even though it's only about 16 years old. If you've yet to view this film, I can't recommend it enough, especially to those who are fans of the dramatic side of filmmaking. I whole-heartedly love this movie for all of these reasons and then some. It's stylistic editing choices and use of on-set effects help this film feel even more authentic than it's script would've already allowed it to, so I have nothing to complain about in retrospect. This is a beautiful movie.

If you don't mind the fact that this Oscar-winning biography alters the real story considerably, it will certainly be a wonderful experience. Full review on filmotrope. com

Altho the writing's sketchy here and there, I'm gonna go along with the majority opinion on this and say that here is perhaps Ron Howard's finest work, the jarring twist mid-film lasting until the end of the work as another math genius gets tried by their own I.Q. and bigtime (see "Proof"). Strangely, this is Connelly's film as the long suffering wife who takes the audience (us) by the hand and shows us "this is not real!" Liked Proof better, but whatcha gonna do?

Russell Crowe and Jennifer Connelly give stunning, emotional performances in A Beautiful Mind. Ron Howard has crafted a masterful film that is a revealing look at mental illness and deserves to be seen. Brilliantly put together to create suspense, brilliantly acted to make us feel for the characters (Jennifer Connelly is astonishing), and a moving story of love and determination, A Beautiful Mind is a beautiful film.