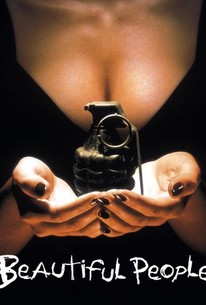 Jasmin Dizdar's debut feature takes place in London on October 13, 1993. England is to play against Holland in a critical World Cup qualifier. The Bosnian war is at its height, Sebrenica is besieged, and the UN is preparing relief airdrops. Serbian Dado Jehan and Croatian Faruk Pruti meet on a London bus. Recognizing each other as fellow refugees from the same village in Bosnia, they try to beat each other up. The subsequent crazy chase through the streets of central London sets the scene for a highly charged dark comedy. Beautiful People draws a portrait of the multicultural life of London where lives of British families are inadvertently linked with the lives of the refugees.

I have made the film sound grim. Actually it is fairly lighthearted, under the circumstances; like Catch-22, it enjoys the paradoxes that occur when you try to apply logic to war.

It's a joyful experience.

Vivid characters rendered impotent by a disorienting tone and a jerky, start-and-stop narrative that dilutes the film's putative emotional punch.

In conception, it's closer to Bruce Beresford's Six Degrees of Separation: Both films call attention to the close relatedness, regardless of geography and class, of humans.

the film offers Americans an empathetic glimpse of the country we revolted against all those years ago.

What it fails to do is tell a coherent story, as everything about this exaggerated tale is hopelessly lost in a sea of silliness and generalities.

Very dull British drama about the Bosnia conflict yet mostly set in London.