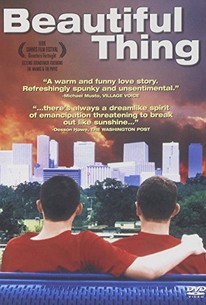 Critics Consensus: An engaging slice of life drama that happens to double as a gay coming-of-age story, Beautiful Thing captures its place and time with deceptive depth and skill.

Critics Consensus: An engaging slice of life drama that happens to double as a gay coming-of-age story, Beautiful Thing captures its place and time with deceptive depth and skill.

Critic Consensus: An engaging slice of life drama that happens to double as a gay coming-of-age story, Beautiful Thing captures its place and time with deceptive depth and skill.

In this alternately somber and witty coming-of-age drama, a pair of teenage boys growing up in a working-class neighborhood become aware of their homosexuality. Introspective Jamie (Glen Berry) is the son of Sandra (Linda Henry), a tough but warm-hearted barmaid who lives in a public housing block in a rough-and-tumble section of South London. Living a few doors away is Jamie's classmate Ste (Scott Neal), an athletic type who often has to take a beating from his hard-drinking father and hard-headed brother. One night, Jamie and Sandra discover that Ste has been kicked out of the apartment and has nowhere to spend the night; Jamie lets him stay at his place, and a casual closeness eventually stirs sexual feelings. While both were vaguely aware they might be gay, neither had ever acted on their impulses, and once Jamie and Ste decide that they're attracted to each other, neither is sure just what to do. Tony (Ben Daniels), Sandra's boyfriend, doesn't know what to think about Jamie's new lifestyle. Meanwhile, Jamie and Ste are themselves a bit puzzled by their neighbor Leah (Tameka Empson), a teenager obsessed with the life and music of Mama Cass Elliott. ~ Mark Deming, Rovi

Because the film is so effective for its first two-thirds and because it has its heart in the right place throughout, audiences may be willing to forgive its final third.

Represents a keen, personal look at the difficulties of growing up gay in a heterosexual world.

In portraying romance, the film transcends its homosexual themes, while at the same time celebrating them.

Reminds me of some of Jonathan Demme's early movies, where ordinary people are celebrated for their eccentricities but not condescended to.

Beautiful Thing isn't particularly deep, nor is it a great piece of filmmaking, but it's so sweet-natured and well-acted that it's hard to resist.

It's still heartwarming to see Ste (Scott Neal) and Jamie (Glen Berry), two teenage boys from a tough south London estate, fall in love and win acceptance from their friends and neighbours.

Mostly though, Beautiful Thing works both as a gallery of life in the faceless but commodious blocks thrown up to house the working (and non-working) classes, and an intimate tale of two lonely boys.

just as it 'takes a village' to raise a child, the 'village' elevates this otherwise ordinary drama

Delightful English film which charts the dawning of love between two homosexuals.

This movie has a sharply observed sense of family and community and astonishingly natural acting.

The performances are mostly quite good, but the script definitely needs work.

I'm going to hold off on providing a higher rating for this film which probably deserves it solely for the touching nature of the two leads and how they interact with one another. What loses the film points is unlikelihood of the eventual acceptance of the couple and a plodding side story that adds nothing to the central picture other than minutes.

Touching film with quite capable actors. As an American, however, I must say that it was often difficult to follow the dialogue due to the thick accents and use of unfamiliar British slang. Despite this difficulty, I would recommend this movie highly to an American looking for a well-done, meaningful LGBT film.

It's a sweet coming of age tale. Set in 1995 it was great to see in the background some Batman Forever candy holders. I used to have these and they were coooool. Anyway the film deals with its subject splendidly and avoids cliche, however as a byproduct of this it also seems to avoid any real conflict. Though it is good to see a guy bullied who isn't bothered by it. Ben Daniels is brilliant as the caring but clueless Tony but the real stand out is Tameka Empson as the Mama Cass obsessed youth. She lights up the screen and steals every moment she's in. A nice script that fashions its scenarios via realistic set-ups although the end dance is a BIT much.

wonderful with a great soundtrack.