Beauty and the Beast2017 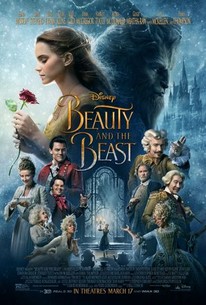 Critics Consensus: With an enchanting cast, beautifully crafted songs, and a painterly eye for detail, Beauty and the Beast offers a faithful yet fresh retelling that honors its beloved source material.

Critics Consensus: With an enchanting cast, beautifully crafted songs, and a painterly eye for detail, Beauty and the Beast offers a faithful yet fresh retelling that honors its beloved source material.

Critic Consensus: With an enchanting cast, beautifully crafted songs, and a painterly eye for detail, Beauty and the Beast offers a faithful yet fresh retelling that honors its beloved source material.

Beauty and the Beast Videos

Beauty and the Beast Photos

Disney's "Beauty and the Beast" is a live-action re-telling of the studio's animated classic which refashions the classic characters from the tale as old as time for a contemporary audience, staying true to the original music while updating the score with several new songs. "Beauty and the Beast" is the fantastic journey of Belle, a bright, beautiful and independent young woman who is taken prisoner by a beast in his castle. Despite her fears, she befriends the castle's enchanted staff and learns to look beyond the Beast's hideous exterior and realize the kind heart and soul of the true Prince within. The film stars: Emma Watson as Belle; Dan Stevens as the Beast; Luke Evans as Gaston, the handsome, but shallow villager who woos Belle; Oscar (R) winner Kevin Kline as Maurice, Belle's eccentric, but lovable father; Josh Gad as Lefou, Gaston's long-suffering aide-de-camp; Golden Globe (R) nominee Ewan McGregor as Lumiere, the candelabra; Oscar nominee Stanley Tucci as Maestro Cadenza, the harpsichord; Oscar nominee Ian McKellen as Cogsworth, the mantel clock; and two-time Academy Award (R) winner Emma Thompson as the teapot, Mrs. Potts. Directed by Oscar (R) winner Bill Condon based on the 1991 animated film, "Beauty and the Beast" is produced by Mandeville Films' David Hoberman and Todd Lieberman, with eight-time Oscar-winning composer Alan Menken, who won two Academy Awards (R) (Best Original Score and Best Song) for the 1991 animated film, providing the score, which will include new recordings of the original songs written by Menken and Howard Ashman, as well as several new songs written by Menken and three-time Oscar winner Tim Rice. "Beauty and the Beast" will be released in U.S. theaters on March 17, 2017.

Critic Reviews for Beauty and the Beast

Unfortunately, the more "real" the movie tries to make everything appear, the harder it becomes to ignore that the necessity to their falling in love isn't particularly romantic

The live-action remake of the 1991 Disney classic hits all the right nostalgic notes - if only it dared to take a few more risks.

It's just a straightforward retelling of the original, with a few cosmetic changes tacked on to make it look like something else.

Bill Condon's live-action remake of Gary Trousdale and Kirk Wise's Beauty and the Beast (1991), the high point of Disney's animation renaissance, is as bloated, awkward, and aggressive as the cartoon feature is fleet and graceful.

The film is certainly a spectacle -- so congratulations, Disney CGI wizards! And there's enough talent involved -- not to mention the good bones of the original story and music -- to make it more than watchable

In a year in which many of the biggest hits have been little more than sops to fanboys more interested in bloodletting than storytelling, here's a film for everyone ... It manages to return a splash of magic to the movies, even if only momentarily.

Tries to cash in on the magic without capturing what was behind that fairy dust in the first place.

Beauty And The Beast is hardly a masterpiece, but it's not faint praise to say it does its job nicely.

Beauty and the Beast is a fancy affair, but delivers too little for me to fall in love with.

A tale as old as time, but this new film brings a new life to the story, while holding true to all the magic of the original.

Audience Reviews for Beauty and the Beast

The real action version of the classic Disney film does have lovely colorful sets and a pretty perfect cast. It's especially nice to see Kevin Kline and Emma Watson does work wonderfully as Belle. The songs (not counting the outstanding title one) are a bit hit and miss but the film's biggest problem is the computer animated Beast. That becomes apparent during his solo song, where the creature sometimes feels sterile and fake. A beautiful mask and make-up would have worked wonders. Fans of the material should still be pleased, especially the finale is pretty good. But man, do I miss good make-up effects.

Chock full of the Disney magic we've all come to expect and then some, this work is infused with nearly an in-your-face undertone: "magic suckers!", that almost feels desperate. As well, there are politically correct minor cast substitutions that felt forced. Still, the Mouse is nobody's fool.

One cannot help but to compare this "Beauty And The Beast" with the Disney cartoon, given that it hews so closely to the original cartoon version. At times in the beginning, the films seemed shot-for-shot duplicates. In that light, the live-action music, characters and singing just aren't as "big" as those in the animated film. However, making such a comparison, is not fair to this live-action version, which itself is very fine. The sets and costumes are spectacular. The CGI is (mostly) impressive. (Just avoid looking at the Beast's face throughout the film and you'll think it was faultless.) The music is marvelous on its own, even if most of the new numbers are lackluster. This version is a definite five-star film on its own, which would be clearly evident it it didn't have to measure up to its predecessor.

It is hard sometimes to shake the feeling that this live-action Disney adaptation is relying too much on the 1991 animation, to the point that it almost feels like an extended version of that film; but even so, it offers a fresh and modern look at the classic story that makes it worth it.

Beauty and the Beast Quotes