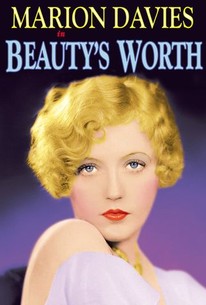 Although it wasn't acknowledged publicly for decades, newspaper magnate William Randolph Hearst and actress Marion Davies were quite an item during the silent era -- and beyond. He produced all her pictures, except for her first one, and generally they were mild affairs which did little but show off her remarkable beauty. This was unfortunate because she was also a talented comic who was capable of much more than these films offered. Hearst hadn't yet begun spending the real big bucks to put Davies in elaborate costume dramas (the first, When Knighthood Was in Flower, would be released later in 1922), and this romantic comedy-drama is pretty typical Davies fare. Even though Prudence Cole (Davies) is a modest little Quaker miss, her prim outfits do not hide her ravishing beauty. Artist Cheyne Rovein recognizes her as a looker right away and offers to design some outfits that will do her justice. Since Prudence is in love with Henry Garrison (Halam Cooley) and he hasn't yet returned her affection, she decides to give it a try. Her new clothes prove she is a stunner, and when she wins a game of charades, it shows she also has personality-plus. Garrison winds up proposing, but Prudence realizes she doesn't care for him after all -- it's Rovein, who recognized her beauty from the start, that she really loves. ~ Janiss Garza, Rovi

Critic Reviews for Beauty's Worth

...falls into the realm of predictable melodrama...

Robert G. Vignola's film is a beauty all right. It's witty, worldly, and wise.

There are no featured reviews for Beauty's Worth at this time.