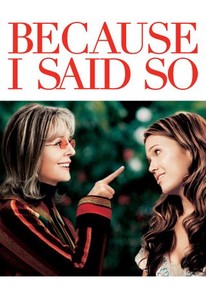 Critics Consensus: Overly reliant on caricatures and lacking any human insight, Because I Said So is an unfunny, cliche-ridden mess.

Critics Consensus: Overly reliant on caricatures and lacking any human insight, Because I Said So is an unfunny, cliche-ridden mess.

Critic Consensus: Overly reliant on caricatures and lacking any human insight, Because I Said So is an unfunny, cliche-ridden mess.

Because I Said So Photos

Diane Keaton stars as a unconditionally loving, but meddling, mother whose vain attempt to prevent her insecure youngest daughter from repeating the same mistakes that she made leads to a series of comic misunderstandings in director Michael Lehmann's affectionate family comedy. When it comes to the topic of motherhood, Daphne Wilder (Keaton) has seen it all. Her eldest daughter, Maggie (Lauren Graham), is a highly respected psychologist and her middle daughter, Mae (Piper Perabo), is both sexy and smart, but youngest Milly (Mandy Moore) just can't seem to get things right no matter how hard she tries. Recognizing that the romantic exploits of her charming-but-struggling youngest always seem to end in tears, concerned mother Daphne vows to find Millie the perfect man. Though she always means well, Daphne's misguided attempt to set her daughter up by placing a carefully worded personal ad proves once and for all that even the most well-intending of mothers can sometimes overstep their boundaries. ~ Jason Buchanan, Rovi

Sophina Brown
as Milly's Staff No. 1

News & Interviews for Because I Said So

View All Because I Said So News

Critic Reviews for Because I Said So

This movie manages to be offensive and yet dull and predictable, as phony as a Kate Spade sidewalk knock-off bag and as unoriginal as the ready-for VH1 soundtrack.

It's a lame duck of a film.

I hated this movie. I think it's the worst performance of Diane Keaton's career.

Laughter is largely absent from this sorry, shrieking mess.

Never met a cliché it didn't love or a situation too hackneyed to be inserted into the mix.

I really wanted to like Because I Said So, but ultimately I just felt pity for it.

In the end, while the mixture looks sweet, it goes down decidedly sour.

Because I Said So seems like it's supposed to be a paean of sorts to motherhood and the enduring love that entails, a love so strong that it inevitably drives its possessor somewhat batty. But what it is, is muddled crap.

The ensuing cycle of miscommunication is endless and trying.

Audience Reviews for Because I Said So

Not funny. Not romantic. Just sappy and superficial. Not worth watching.

This is just a really nice chick flick about 3 sisters, (Lauren Graham, Mandy Moore and Piper Perabo). They have a slightly controlling mother, Daphne, (Diane Keaton), who has been single herself many years and has become worried about Millie (Mandy Moore) and the bad choices she keeps making in men (her sisters are happily married). Worried that Millie will end up alone like herself, Daphne secretly writes an online personal ad and then interviews all the men. Her choice is Jason, a slightly arrogant professional guy (lawyer maybe? Can't remember), but she also meets a charming musician and single dad, Johnny, by chance. Daphne sets it up so Millie and Jason can meet, without Millie realizing her mum set it up, but Johnny fixes it so he also "Accidently" meets Millie. The rest of the movie is Millie trying to figure out which guy she wants, and the fury when she enevitibly finds out what Daphne did. Okay, it's a no brainier, but I enjoyed this and Millie is a likeable, though flawed character, digging herself into a mess by sleeping with both the guys. Daphne is also likeable, and sympathetic in her way. A nice story about female relationships with a few laughs and some beautiful looking cakes.

I really liked this film. Diane Keaton is always the best type of actress to play a mother as she's extremely funny. Both of the guys were good to look at and even though you genuinely knew

I was so, so surprised to find that a) this was not directed by Nancy Meyers, and b) it was directed by the same guy who directed The Truth About Cats and Dogs. Oh well, you win some, you lose some. And this one is definitely a loss - I watch my fair share of bad and really bad movies, but there was something about this one that just made me not sad but angry. The cheese music that had to play every couple seconds a quasi-emotion showed up, Diane Keaton acting a damn fool, the stupid slapstick trips and falls and oh my god gag gag gag. Bland mixes with bland mixes with bland. This is upper crust suburbanite at its very, very worst.

Because I Said So Quotes