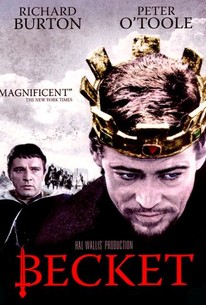 A historical costume drama of the grandest order, "Becket" is the true story of the friendship between King Henry II and Thomas à Becket, a royal courtier and confidant whom Henry appoints as Archbishop of Canterbury. Once proposed for the office, Becket immediately perceives what the King does not: that his job as head of the Church will inevitably bring him into conflict with the King's interests. Until that point, he had been the King's closest friend and beloved companion, serving him faithfully in all things despite Henry's attitude towards the Church. However, he sees that as Archbishop he will be unable to take so nonchalant an attitude, and so vigorously objects to the plan. The basic theme covering separation of church and state reverberates as it did between King Henry VIII and Thomas More, 400 years later [as famously recounted in "A Man for All Seasons"] and still reverberates today. As Becket takes his duties with the church more seriously, their lifelong friendship is strenuously tested. He finds himself increasingly at odds with the King, setting off a chain of events that will culminate in tragedy.

Richard Burton
as Thomas a Becket

Inigo Jackson
as Duke of Leicester

Felix Aylmer
as Archbishop of Canterbury

Jennifer Hilary
as His Daughter

John Phillips
as Bishop of Winchester

Frank Pettingell
as Bishop of York

Hamilton Dyce
as Bishop of Chichester

Patrick Newell
as William of Corbeil

Magda Knopke
as Girl on Balcony

Edward Woodward
as Clement
View All

Ripe with homoerotic undercurrents -- which O'Toole mines with relish in his great hysterical performance, full of cunning, eloquence and mad outbursts.

Becket may seem like a movie of yesteryear, but its timeliness brims over with rousing, meditative discourses between Henry and the church leaders on the separation of church and state.

Everything that Doctor Strangelove is -- daring and inspired, vibrant and brilliantly staged -- Becket is not.

The picture is being re-released in 30 cities around the country before finally appearing on DVD after years of online foment from fans.The DVD is due in May, but try to catch it in theaters first. It's worth it.

Burton is extraordinary in one of his rare good movie roles and O'Toole is regally madcap and larger than life.

The pleasure of these two extravagantly gifted actors at the top of their game -- their diction! their conviction! their beauty! -- is enormous.

Worth a look... for a single performance:... Peter O'Toole as Becket's king, Henry II.

Just as the characters' loyalties to one another are called into question, so, too are ours: Becket enters a moral grey area from which it never fully emerges.

Becket is a terrific example of the historical play or novel turned into a cinematic drama crackling with whip-smart dialogue. I imagine actors must go mad with delight when they read a script that has page after page of dialogue this good.

The material remains relevant, and the film as a whole is completely engrossing. (It may be nearly 2 1/2 hours long, but it doesn't feel like it.)

In a tale of nepotism gone wrong, Henry II appoints his friend Thomas Becket as Archbishop of Caterbury but isn't prepared for the consequences when Becket takes his commitment to God seriously. Richard Burton plays Becket with a reserve and subtle conscience, and from the first moment, he makes the character profoundly interesting. He's helped by a good script that makes who Becket is the focus of the first act. Peter O'Toole is hilarious and at his scenery-chewing best, playing the madcap king with the kind of gusto that made him famous, and his third act scenes reveal a humanity - a pathos - that makes his character even more interesting. Overall, despite the fine art direction, most of Becket is a character study involving the two leads, and the acting master class that is Burton and O'Toole is enough to carry this film admirably.

Becket is a fantastic period piece. It's long and some scenes are very drawn out, but it is well worth the watch. It's visually stunning and there isn't a bad performance in the film. Becket is the true story of the friendship of King Henry II and Thomas Becket. They have a strong friendship until Henry makes Becket the Archbishop of Canterbury. Becket loyalty turns from Henry to God and the King doesn't like that too much. It truly is an epic film.

Two best friends, one an amoral king, the other a man of God. This movie has a great story and great actors for the characters. It's kind of long, but I really liked it, and I recommend seeing it.

Awesome, the first real bromance picture. As actors Burton and O'Toole did fantastically well. As was expected I think. O'Toole's character a bit more, it's what you get for being animated, I guess. I will admit it dragged a bit towards the middle, but even for someone who isn't religious, I found it interesting and even funny at times and well worth watching.