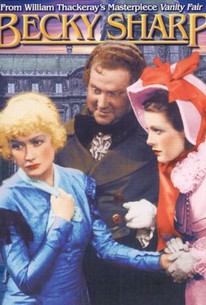 Now famous as the first feature film produced in the three-strip Technicolor process, Becky Sharp is also an enjoyable effort in its own right. Adapted from William Makepeace Thackeray's Vanity Fair, the film stars Miriam Hopkins as Becky Sharp, a resourceful, totally self-involved young lady who manages to survive any number of setbacks and deprivations in the years following Napoleon's defeat at Waterloo. In her efforts to advance herself, she manages to link up with a number of not altogether attractive gentlemen, including the Marquis of Steyne (Cedric Hardwicke), Joseph Sedley (Nigel Bruce), Rawdon Crawley (Alan Mowbray), and George Osborne (G. P. Huntley Jr.) She rises to the pinnacle of British society, only to tumble and fall into the humiliation of singing for her supper in a cheap back-alley beer hall, but, like her spiritual sister Scarlet O'Hara, Becky never stays down for long. The film ends on an ambiguous note, never hinting that Becky will eventually drop her current beau and settle down to a life of smug piety, as she does in the novel. Begun in 1934 with Lowell Sherman in the director's chair, Becky Sharp was forced to shut down production when Sherman died; he was replaced by Rouben Mamoulien, whose unerring eye for cinematic splendor exploited the new color process to the utmost, especially during the opening Brussels Ball sequence. Until its recent archival restoration, Becky Sharp was available only in a shortened, two-color version, which had the negative effect of diminishing the film's strong points and overemphasizing its weaknesses (This version is still available on the public-domain market). Becky Sharp is an enormous improvement over the low-budget 1932 version of Vanity Fair, which updated the story to the 20th century and cast dumb-blonde specialist Joyce Compton in the role of Becky.

Cedric Hardwicke
as Marquis of Steyne

William Faversham
as Duke of Wellington

Doris Lloyd
as Duchess of Richmond

May Beatty
as Briggs

Olaf Hytten
as The Prince Regent

Tempe Piggott
as The Chairwoman

The triumph of technicolor. Robert Edmond Jones is responsible for the superb color design, Rouben Mamoulian directed, Miriam Hopkins plays Becky. A picture that cost a fortune and will probably make several.

With the exception of Miriam Hopkins in the title role, the acting in Becky Sharp is almost violently negligible.

Mamoulian's film is best known for its innovative use of three-color Technicolor, but in the title role, Miriam Hopkins gives a strong, Oscar-nominated performance.

1935 becky sharp feels just like a faithful archetypical representation of one piece of classic literature. the naturalistic vibrancy of miriam hopkins is un-canny, and she makes me wonder whether method acting has any influence over actors of 1930s tinsell hollywood where theatrically histronic acting style is what most actors apply. how could miriam be so fluent and natural even in a story with 19th century britain as background. i believe everyone knows the sketchy lines of the story of vanity fair, the protagonist becky sharp is the social climber whose grits of life are admirable even she does have some despicable moments as she would do anything for survival. i love the beginning when becky throws the book at her spinster chaperon, and the movie ends with becky tossing the book toward her hypocritie relative. she feigns weeping to deceive her beau's straight-laced auntie and eavasdrops complacently outside the door with a cookie chewing in her mouth mischievously.(marvellous!) she does it so smoothly that you don't feel it's acting....really i cannot picture anyone who possesses enough chearful light-heartedness and snickering cynicism simultaneously to do justice of a character like becky sharp as miriam hopkins does. when actresses are bright and light-hearted, they tend to whitewash and lighten the picture without enough sarcasm, for example: audrey hepburn or shirley maclaine, or the picture turns out to be screwball comedy with carole lombard or katherine hepburn....or when they're great deliverer of mockery and sarcasm, there seems to be too much hard-boiled bitterness in them then the picture ends up something like noir comedy, for example: bette davis, joan crawford and lots of 40s noir icons like jane greer....my point is, only miriam hopkins could pull off these two contrary qualities and let this dichotomy co-exist harmoniously. only miriam hopkins could! i suppose that makes her unique! she makes you feel she IS becky sharp when you finish watching this movie, and you cannot picture anyone else in the same shoes. (my minor complaint is..reese witherspoon's adaption of vanity fair is the worst adaption i've ever seen even she's no bad actress...but it feels like some american girl fakes to be a character in 19th century britain and tries to turn this character into a sultry vamp like american film noir...it doesn't feel like comedy and far far far from noir) as for the technical level, what lessens the picture a little would be its over-saturation of colors, yes, i realize it's after all a vanity fair, and it's supposed to be "colorful" and glamourous, but to some point, you feel the nuance on the palette has been blurred into a slight mess. the backset stereo does sound jarringly coarse in some parts of the movie. i suppose, it's 1930s, there're still lots of technical issues to work on in a time when audience found color picture still a daring deed like today's 3D.

Hmm...absolutely no reviews. It is a difficult film to see but it is worth taking a look. One of the better films of the thirties.