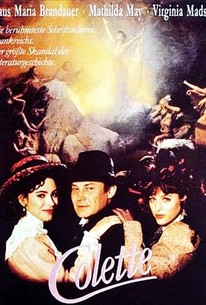 Danny Huston's Becoming Colette purports to be an account of the early formative years of French author Gabrielle Colette (Mathilda May) and her evolution from naive country bumpkin to a Parisian socialite in a George Sand suit. The film turns up the heat with Colette as a teen with a crush on her father. This desire is then transferred to the suave and cosmopolitan Villars (Klaus Maria Brandauer) -- a fatherly twenty-five years her senior. The two start their hanky-panky on her father's country estate, resulting in a whirlwind courtship and marriage. Their honeymoon night is a succession of passionate unbuttonings. Colette writes in detail about it the next day in her diary. Villars then takes Colette to the Moulin Rouge to meet his mistress, the bisexual Polaire (Virginia Madsen). Polaire and Colette hit it off and soon are taking it off in a lesbian embrace. Meanwhile, Villars has taken to publishing Colette's diaries and is making money hand over fist. But finally Colette catches on after realizing that while she is toiling away at home cranking out Claudine books, Villars is busy taking her earnings and spending the cash on a succession of frilly mistresses. Making her stand in pants, she decides to abandon Villars and go out on her own.

Mathilda May
as Sidonie Gabrielle Colette

There are no critic reviews yet for Becoming Colette. Keep checking Rotten Tomatoes for updates!

There are no featured reviews for Becoming Colette at this time.