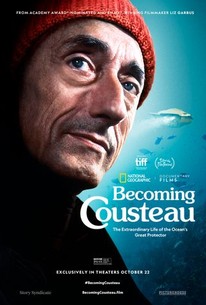 Critics Consensus: As visually thrilling as it is edifying, Becoming Cousteau pays fitting tribute to a pioneering explorer and environmental advocate.

Critics Consensus: As visually thrilling as it is edifying, Becoming Cousteau pays fitting tribute to a pioneering explorer and environmental advocate.

Critic Consensus: As visually thrilling as it is edifying, Becoming Cousteau pays fitting tribute to a pioneering explorer and environmental advocate.

Adventurer, filmmaker, inventor, author, unlikely celebrity and conservationist: For over four decades, Jacques-Yves Cousteau and his explorations under the ocean became synonymous with a love of science and the natural world. As he learned to protect the environment, he brought the whole world with him, sounding alarms more than 50 years ago about the warming seas and our planet's vulnerability. In BECOMING COUSTEAU, from National Geographic Documentary Films, two-time Academy Award (R)-nominated filmmaker LIZ GARBUS takes an inside look at Cousteau and his life, his iconic films and inventions, and the experiences that made him the 20th century's most unique and renowned environmental voice -- and the man who inspired generations to protect the Earth.

Becoming Cousteau is no hagiography, but greater distance might have also allowed Garbus to reflect more on the man's environmental legacy.

A nuanced portrait of an oceanographer whose warnings are more prescient than ever.

He appears to have been a remarkable man, and Becoming Costeau, this detailed portrait of him, does him full justice.

It's a very traditional documentary in many ways, but if you are fascinated by this man and his life... I'm sure you'll enjoy it.

No wonder entire generations were captivated by this stuff. It wasn't just the subject matter; it was the filmmaking itself. Garbus conveys that beautifully while briskly threading Cousteau's biography and emotional journey throughout.

The director Liz Garbus does a workman-like job of telling this part of his story, with hints about the darker side. Cousteau was a complex and driven man, whose views about the world changed markedly.

This in-depth documentary peels back the onion layers of complexity in Cousteau's irrepressible personality...essential viewing.

Becoming Cousteau is as educational as it is insightful...

This is a fascinating, educational documentary about the legacy of a complicated man whose singular focus on the ocean cost him personal relationships but earned him international renown.

[Jacques-Yves Cousteau's] engaging manner and enthusiasm for the planet made him a beloved celebrity; he opened eyes to the beauty, the teeming life and health of our oceans and planet for more than forty years.

The film plays like a message for the present and the future more than a story about the past.

Becoming Cousteau is an honest yet engrossing portrait of one of the most iconic explorers.

There are no featured reviews for Becoming Cousteau (Cousteau) at this time.