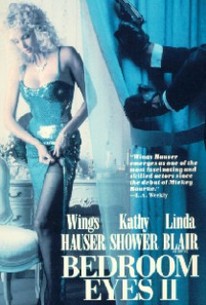 This sequel to 1986's Bedroom Eyes is the mixture as before, with Wings Hauser replacing the first film's star Kenneth Gilman. Once again, stockbroker Hauser begins succumbing to his chronic voyeurism. And also once again, his obsession gets him mixed up in a murder. The film's secondary villain-revealed early on, so we're not spoiling anything-is the vengeful twin sister (Linda Blair) of Hauser's late wife. The real villain is.....but now we would be spoiling things, though veteran filmgoers will be able to spot the guilty party in Reel One.

There are no critic reviews yet for Bedroom Eyes II. Keep checking Rotten Tomatoes for updates!

There are no featured reviews for Bedroom Eyes II at this time.