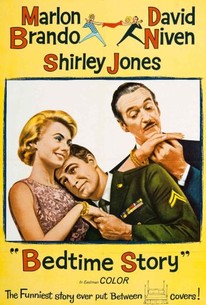 Amateur con-artist Freddy Benson stumbles upon the path of Lawrence Jamieson, a slick, high-stakes con man. Freddy coerces Lawrence into letting him in on a scheme to target Janet Colgate, an innocent "American soap queen." However, Janet has a few surprises in store for the men.

Francine York
as Gina
View All

Mark this one down as good, crisp fun.

Bedtime Story will divert the less discriminating, although there are times when even such major league performers as Marlon Brando and David Niven have to strain to sustain the overall meager romantic comedy material.

A kind of prolonged sick joke.

Had Bedtime Story been done in the slambang artificial style of the old screwball comedies, in which a heel is never resouled in the last act but maintains his heelishness proudly to the end, the nastiness might have been disinfected.

A disappointing attempt at comedy, considering the names of the creators and the adroitness of the stars.

Marlon Brando used to say that making Bedtime Story was one of the best times he ever had on a movie set. It shows. He delivers a joyful, energetic and fantastically entertaining performance. Watching him play off of David Niven (who is also very good) is so much fun to watch. This is a politically incorrect comedy that draws its laughs from dialogue.