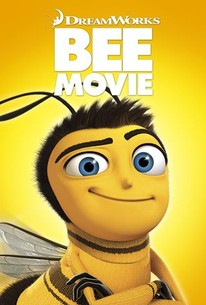 A recent college graduate, Barry B. Benson wants more out of life than the inevitable career that awaits him and every other worker in New Hive City--a job at Honex making honey. Barry jumps at the chance to venture out of the hive, and soon encounters a world beyond his wildest dreams. When Barry inadvertently meets a quirky florist named Vanessa, he breaks one of the cardinal rules of beedom--he talks to her. A friendship soon develops, and Barry gets a guided crash course in the ways of the human race. When he shockingly discovers that anyone can purchase honey right off the grocery store shelf, he realizes that his true calling is to stop this injustice and set the world right by suing the human race for stealing the bees' precious honey.

Jerry Seinfeld
as Barry B. Benson

RT on DVD: Call It, Friend-O — No Country For Old Men Hits DVD
Down but Not Out, HD DVD Soldiers On
Jeffrey Katzenberg on Bee Movie: The RT Interview

Personally, I think I liked "nothing" better.

[T]his comedy provides sporadic chuckles but, you'll pardon the expression, drones on for much of its running time.

Seinfeld the professional cynic has become Seinfeld the environmental crusader. Who'd have thunk it?

Given the amount of talent involved - Renée Zellweger, Matthew Broderick, Rip Torn, and Seinfeld himself - it all feels like a terrible waste.

Amusing and likeable, but scarcely memorable.

While the premise is unique, the approach is generic.

It certainly is beautiful.

Seinfeld's dry delivery makes for a certain adult sensibility, but even the horde of celebrity cameos can't really lift the story off the ground.

Here's the final buzz: Bee Movie deserves to be queen bee at the box office.

Its moral that even the smallest creature can make a world of difference is one to be appreciated. It is a shame, however, that it could not keep up its energetic and fun pace established within its first act.

ENOUGH WITH THE METAPHORS AND THE GODAMN PUNS! They made this film so bloody annoying! The animation isn't really anything we've not seen before fro Dreamworks and it's an appauling outing. The main character is just SO IRRITATING and the story is nothing original. It's an instantly forgettable film that is appropriately titled B-MOVIE....

I enjoyed this movie for a few years but as time went by, I realized that it wasn't as good as I thought, it had some good jokes, a horrible and cliche plot, the characters were kinda weird, but I will admit I couldn't have chosen the voice actors any better myself.

One of the best Feature length Cartoons in the last few years. It will inevitably be compared to the likes of ?Antz? and ?A Bug?s Life?, but in my opinion, it has a much better storyline to it.

Watch out for the guest appearances, which adults may find comical.