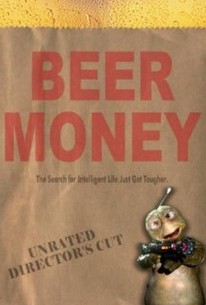 Its title notwithstanding, this zany made-for-cable comedy-fantasy is motivated by a lack of "beer money." While camping in the woods, a trio of impoverished party animals -- Tim (Mark-Paul Gosselaar), Rut (Nick von Esmarch), and Blank (J.P. Manoux) -- stumble upon a lovable E.T.-like space alien. Nicknaming their new "friend" Greenie, our dunderheaded heroes hope to sell the alien to a sleazy TV tabloid show, "Unbelievable Encounters," thereby keeping themselves in beer money for the rest of their lives. The problem now is to keep Greenie a secret from the local townsfolk until the TV deal is finalized. Producer/writer Rich Wilkes appears unbilled as Nick the Hollywood Snake. The sort of film that makes The Three Stooges look subtle, Beer Money debuted over the USA network on June 19, 2001.

Gabriel Pimentel
as Greenie the Alien

Writer Rich Wilkes' script aims for bad taste and hits the target somewhere below straight-to-video and just above unwatchable.

There are no featured reviews for Beer Money at this time.