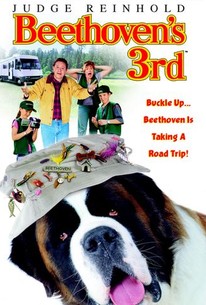 Beethoven the Saint Bernard is back in this comedy for the whole family, in which the Newton Family (with their rather large pet in tow) hops into their camper for a cross-country vacation. Along the way, they encounter a gang of bad guys. Can Beethoven help bring them to justice? Beethoven's 3rd stars Judge Reinhold, Julia Sweeney, Jamie Marsh, and Michaela Gallo. Charles Grodin, star of the first two films, opted not to appear in this one.

Blake Boyd
as Gary
View All

From a dramatic standpoint, there is not even the level of emotional depth achieved by the second Beethoven film, but as basic and unimaginative as the slapstick often is, it delivers to its target audience.

Beethoven's 3rd was pretty bad, but it improved on the second film and gained a new cast of DVD actors, which actually worked in a cheap way. I didn't quite enjoy it, but it is very safe to say that it's not as bad as the second.

A unforgetable piece of Gold

SOME SPOILERS Summer sequels are usually bad enough, but when it comes to straight-to-video sequels...? They're even worse. "Beethoven's 3rd" does nothing to change that. Judge Reinhold, once an actor who actually appeared in theatrical releases, stars as one of the seemingly endless Newton bunches. His brother, once played by the ten-times-better Charles Grodin (who has long since ended his film career and gone on to write books and become a news journalist for CBS), has dropped off the Saint Bernard Beethoven on his brother and his wife (Julia Sweeney) before they go on an RV trip. Aww, what a cruel thing to do. But, in reality, it's just as easy way of getting a sequel put together. Grodin won't come back? Get him a brother and avoid his appearance in the film! For example, at the end of the film, Reinhold is supposed to meet up with his brother, where they are politely informed by some old man that the original Newtons are still in Europe. Most likely for another year. Another YEAR?!?! Boy, how did they jump from a week to a year in Europe? Perhaps the film execs coaxed them into it... The thing with "Beethoven's 3rd" is that it doesn't even try to come off witty, or even funny at that. Countless gags just do not work. Take a typical example: the bad guys in the film are a hyper-active caffeine addict and a "Star Wars"-quoting freak, both of whom are supposed to be funny but are not. In one scene they are trying to get into the Newtons' RV to steal a DVD (long story). They run around like children with little black capes on. Before they do so, they equip themselves with night-vision-goggles and a type of spray that blinds people. We hear Baddie 1 say, "Now, whatever you do, do NOT look at light with your goggles on, and do NOT release your spray!" We know exactly what's going to happen next, and sure enough--no surprises here--they look at light and release their gas cannisters. I mean, how *bleeping* obvious can you *bleeping* get? The filming style seems like a ten-year-old directed it. A mentally-challenged ten-year-old. In one bit, Reinhold is supposed to be struggling in an RV with Beethoven, and to make it look like the RV is shaking, the director wiggles around a handheld camera, left and right, left and right. That trick is one of the oldest in the book. In the "Cheap Effects" book. What was their budget--two dollars? And then, with all of that, the humor is literally non-existent. Instead of being at least AMUSING and SLIGHTLY FUNNY like the original "Beethoven" film (which I like mainly because it is a sweet, good-natured family film), this flick single-handedly rips off every genre and every joke. Ever. At times it's a bad mix between "National Lampoon's Vacation" and "Turner and Hootch," at other times a rip-off of "Star Wars" and "Meet Joe Black." See what I mean by bad combinations? And furthermore, this sequel is completely cashing in on the first two flicks. I can put up with certain things in films, but I feel the most cheated when I know that a sequel was slip-shoddly put together to bring in some money and nothing more. That is when I really hate a film. But "Beethoven's 3rd" is still one of the worst films I've seen in a long, long time, regardless of being a cheap sequel. The gags aren't there, the wit isn't there, the attaching and likable characters aren't there, the dialogue isn't there. Heck, the entire movie isn't there. Followed by an equally-horrible 4th (and 5th?) sequel(s), I'd say this franchise is dead weight. What was once amusing and interesting because of attaching characters and a light-hearted script is now another chip off the ol' sequel-cash-in block. Avoid at all costs.

Pretty funny. For a third one, it's actually good. It's getting a little further out there as each movie goes on, but, it's worth a watch if your PRETTY bored, and have some little kids too keep occupied