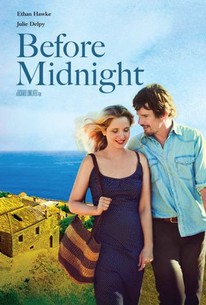 Before Midnight is an upcoming American romance drama film and the sequel to Before Sunrise (1995) and Before Sunset (2004). Like its predecessors, the film was directed by Richard Linklater. As with the previous film, Linklater shares screenplay credit with both actors from the movies, Ethan Hawke and Julie Delpy.(c) Official FB

Jennifer Prior
as Ella

Charlotte Prior
as Nina

News & Interviews for Before Midnight

View All Before Midnight News

Critic Reviews for Before Midnight

A refreshing counter-point to Hollywood's typical happily ever after stories.

Unleashing a stream of feminist consciousness that is both outraged and outrageous-and cathartic because we are laughing with her, not at her-Céline emerges as a 21st-century hero and Delpy as the Carole Lombard of our time.

While the film has certainly satisfied many audiences and critics across the board, I was left very cold and bewildered, questioning what I even saw.

'Before Midnight' has all the best qualities of 'Sunrise' and 'Sunset' (a love of conversational dialogue, long takes that value the joy of performance and interaction, gorgeous European locations), yet it is a grander and more complicated achievement.

Hawke and Delpy, who co-wrote the screenplay with Linklater, make this oscillation between badinage and feistiness, cosiness and irritability, look effortless.

This is a universal X-ray of bourgeois love, one that in a few decades will get around to something like Amour.

Before Midnight's journey is not only an intellectual one.

Done with humor, heart and pathos, often in the same scene, it is a poignant farewell to two characters who grew up in front of us.

Linklater closes one of the best romantic trilogies in the history of modern cinema with Before Midnight. [Full review in Spanish]

In the brilliant third part of Richard Linklater's two-decade spanning trilogy, Ethan Hawke and Julie Delpy stroll through a paradise-on-earth slice of Greece.

Having spent some of the most romantic scenes in all of cinema in their company (a stroll at dawn in Vienna, Delpy singing "A Waltz for a Night"), the thought of their divorce will hit you harder than any of your own breakups.

Beautifully lensed by Christos Voudouris, the light, the location are celebratory and metaphoric with a timeless classic beauty serving as a testament to the battles of life and marriage and surviving with dignity and grace.

Debbie Lynn Elias
Behind The Lens
View All Critic Reviews (206)

Audience Reviews for Before Midnight

It is immensely refreshing to see again these two characters who we once (twice) learned to love, now in a story that examines with utmost honest the natural conflicts of married life - which are also present for this couple who seemed so suited for a happy ending together.

This is the most depressing, and definitely most realistic portrayal of romance, of the Linklater trilogy. Julie Delpy and Ethan Hawke return as Celine and Jesse, now married with twins, living in Europe and enjoying a family vacation with friends. While the first two films were romantic because of what could be, this one is romantic for what they are, who they've become, and what's in store for them. Addressing the problems of the last film, Jesse worries about the distance between him and his son, about how much his ex-wife loathes him, and his own shortcomings as a father and a writer. Celine works constantly and worries about their life in Europe and how they adjusted to their marital woes. They argue, bicker, and yet love each other unequivocally, showing the audience that yes things get rough, and sometimes you want to quit, but in the end love is malleable and never-ending in its simplicity. This is by far the most beautiful of the three films and the best written of the three as well.

Jesse and Celine's marriage encounters hardship as they attempt to manage life together years after their first meeting. It seems that the "Before" films are the only Richard Linklater films that I enjoy. Linklater's penchant for dividing people into two distinct groups, rebels and sell-outs, wanes when he focuses on Jesse and Celine, and the characters have more depth, more intellectual spark, more remarkable conflicts than any of Linklater's other characters. Their conflicts are remarkably real, and the reflections on life and relationships more poignant than most of what we see in modern romances. The plot - and there is a plot to these films - builds organically, borne out of reasonable assertions by both characters; no one is demonized in these films even if there is conflict. The film's climax is touching, heartfelt, and moving. The film's drawback is similar to its strengths. After all, we're so used to quick cuts, shallow multiplots, and scenes that get in, get out, and leave nothing fully explored that it takes a long period of adjustment before we can fully appreciated what Linklater does with these characters. Ethan Hawke and Julie Delpy have the type of chemistry that is rarely captured on film, but I suppose that acting these parts for almost twenty years has its advantages. Overall, Before Midnight might be the strongest film of the "Before" trilogy, but it's hard to make that determination as each is precious in itself.

Julie Delpy and Ethan Hawke portray a couple so well that at times I felt as if I were intruding as they navigate/negotiate both their present day lives as well as their futures in Richard Linklater's sublime paean to modern yah-but-we're-educated, not-like-our-dumb-parents love. Pretentious and self aware throughout, while essentially only 5 or 6 beautiful conversations, inter personal/political maneuverings, and yet ... therein the sparkle. I dare you to watch this and not think at least once that you've had their very conversation, with exactly the same emotion, and the same guile. My only problem with this was the desire to see the American speak at least a little French f'cryinoutloud.