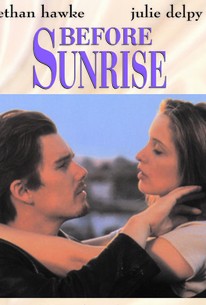 The film revolves around the story of a young man and woman who meet on a train and impulsively decide to get off at Vienna. With only one night ahead, the two spend their time exploring the city and getting to know each other, knowing that they have to eventually go their separate ways.

Andrea Eckert
as Wife on Train

Hanno Pöschl
as Husband on Train

Karl Bruckschwaiger
as Guy on Bridge

Tex Rubinowitz
as Guy on Bridge

Harold Waiglein
as Guitarist in Club

Albert Delpy
as Man at Grill

Barbara Klebel
as Musician on Boat

Wolfgang Staribacher
as Musician on Boat

Critic Reviews for Before Sunrise

Before Sunrise is so much like real life -- like a documentary with an invisible camera -- that I found myself remembering real conversations I had experienced with more or less the same words.

Capturing an effervescent mixture of the mid-90s, it's a striking, authentic observation of two people experiencing a romantically charged connection which would come to erode and inform the shape of their future.

There are so many perfect moments in this film; it is hard to list them without excluding others.

What a film like Before Sunrise champions is that some of the most meaningful moments in our lives can be sensual and ephemeral: a look, a touch, a feeling, a few short hours.

The films have always been about the marvels and limitations of impersonation, since behind Jesse and Céline we see Hawke and Delpy, celebrities whose stars were bright already in the first film and have intensified, owing partly to this series...

There's a vulnerable undercurrent beneath this film, one that beats and throbs with the stolen looks, brief touches and romantic under-the-stars kisses.

Undoubtedly one of the most romantic movies of all time...

...a bittersweet celebration of romantic frisson - the notion that our most precious moments of connection are often the fleeting ones.

Linklater captures romance at the sunset of gadget-free existence ... holy moments when no gadget or lens comes between us and our immediate company and surroundings.

The combination of optimism, tragedy, and the fuzzy warmth of new love is absolutely flawless.

Audience Reviews for Before Sunrise

One of my favorite movies of all time. This is what great romance movies are made of. The story is not that complicated: it's just two strangers who meet on a train and spend the rest of their day (and night) together. The dialogue feels very natural, almost like we're evesdropping on a real conversation. There are so many scenes and bits of dialogue from this movie that I loce and that ring true to my own (or anyone's) life. It is truly a hidden gem and a pleasure to rewatch every other year.

Sweet romantic movie about an American guy meeting a European girl on a train and spend the day together in Vienna. Similar story to serendipity.

I have mentioned in some of my past reviews that of the many different types of film I enjoy, one of them is the type where the story takes place over the course of a few hours or a day. This is one such film. This also happens to be a film by Richard Linklater (whose work I really enjoy). I'm not real big on romance films, but when I can find one done right, then I'm usually pretty happy. This is one of those films. This movie is almost sickeningly sweet and romantic. It's also pretty honest and realistic. This isn't some sort of feel-good fantasy, it's two souls who meet, spend a day together in a city just wandering around and talking, then part ways- possibly never to see one another again. This, like my favorite Linklater film (Dazed and Confused) is a film I would like to/wish I would have made. It's a simple concept, and shouldn't really work, but it does. I think it does work because Linklater knows that films don't have to have plot to be good. Not much really happens here aside from walking and talking, but it feels like an immense amount of time has passed once the end credits roll. The characters have interesting things to talk about, and a lot of this reminded me of sitting in smokey bars and greasy spoons yakking my head off over coffee or beer with friends. In a way, I feel a lot like Jesse. I try to cover up romanticism with cynicism. I however, do not have the artsy, slacker attitude or looks of Jesse (or Hawke), and am not quite as cynical, but he is a character I feel I am on a similar plane with. Julie Delpy is charmingly cute, but not a sexy bombshell. I'm okay with that. I think she's a wonderful actress (with talent and looks), and she fits the part perfectly, as does Hawke. She seems too uptight and opinionated, just like how Jesse is perhaps too much of an immature bum. Even though these two aren't the most likable people, you can't/don't hate them because they are too similar to most of the world's population. I basically loved everything about this film. The dialogue and performances have to carry it, because there's really nothing else, but that's fine, because those are done so well. The music and camera work are also nice. Besides just walking and talking the scenery is gorgeous, and the music is just as fun to listen to as the conversations. I think I may actually hate this film because I wish I would have seen it sooner and also because this is the type of thing I'd love to do (cinematically and in real life). I'm mad that this film beat me to it. It's a wonderful concept and the ending for me was just great. Had this been directed by some other director, most of this (if not all of it) would have been false, too sappy, and had an eyerolling worthy ending. Bravo.