Before the Devil Knows You're Dead2007 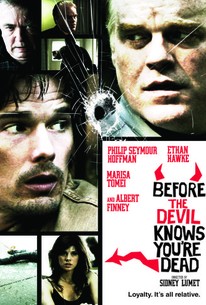 Critics Consensus: A tense and effective thriller, Before the Devil Knows You're Dead marks a triumphant return to form for director Sidney Lumet.

Critics Consensus: A tense and effective thriller, Before the Devil Knows You're Dead marks a triumphant return to form for director Sidney Lumet.

Critic Consensus: A tense and effective thriller, Before the Devil Knows You're Dead marks a triumphant return to form for director Sidney Lumet.

Before the Devil Knows You're Dead Photos

Philip Seymour Hoffman, Ethan Hawke, Albert Finney, and Marisa Tomei star in director Sidney Lumet's thriller concerning two brothers who hatch a plan to rob their parent's jewelry store. When the job goes awry, the entire family is set on a collision course with tragedy. Andy (Hoffman) is an overextended broker in desperate need of some cash. His brother, Hank (Hawke), isn't much better off, so when Andy hatches a plan to rob their parent's modest jewelry store, it seems like a foolproof way to make a quick buck. But Andy's trophy wife, Gina (Tomei), is secretly sleeping with libidinous younger brother Hank, and when the robbery proves a complete disaster it isn't long before loyalties start to shift. Now Andy and Hank's father, Charles (Finney), is determined to make the unidentified robbers pay for their crime. What's a father to do when he discovers that the ones he loves have become his worst enemies? ~ Jason Buchanan, Rovi

Guy A. Fortt
as Vendor

Critic Reviews for Before the Devil Knows You're Dead

I enjoyed it all the way through the last second.

Suspense and action would be enough to seal this film, but the feeling of dread, that under different circumstances this could be us, makes this a heist picture for the ages.

The movie's title comes from the Irish toast, 'May you be in Heaven half an hour before the Devil knows you're dead.' Unfortunately, everyone in the film is running about 35 minutes late.

Before the Devil Knows You're Dead won't do much for anyone's feelings about human nature, but it will definitely restore your faith in gritty crime movies.

The film's director, Sidney Lumet, is 83 but he hasn't lost his feel for bleak New York stories programmed to end in tears.

Conceptually bold and unnervingly suspenseful, Before the Devil Knows You're Dead is one of the best films Lumet has directed in a very long and at times uneven career.

Maybe it's just a bad script. That said, I love the way Hoffman manages to elicit sympathy for his character, a role coated with a thick layer of disgust. In one scene, he has an emotional breakdown in a car that makes the whole film worth watching.

Original, modern and classic at the same time... The actors' direction is sublime. [Full review in Spanish]

Lumet has created one of his most exciting and emotionally resonant films in quite a few years.

Sydney Lumet uses a fractured storytelling technique to get to the bottom of this family train-wreck.

A sleazy yet intriguing thriller where bad people continue to make major mistakes that manage to shatter their lives and everyone's around them.

Audience Reviews for Before the Devil Knows You're Dead

Sidney Lumet's final film is purely an actor's movie. Every performance is first rate and while the drama at times becomes overly melodramatic, Before the Devil Knows You're Dead is heart wrenching drama told from multiple perspectives about one horrific action and the consequences that follow.

Domineering Philip Seymour Hoffman talks his weak willed younger brother into helping him rob their parents' jewelry store to solve both their financial difficulties, but when the heist goes wrong their lives start to unravel. Sidney Lumet has been making quality thrillers for 50 years, but in his latest effort he takes a few cues from his younger pretenders. The plot themes have a lot in common with Fargo and A Simple Plan and the execution is reminiscent of Jackie Brown and its familiar disjointed timeline. In fact there is little here that hasn't been done before so don't expect much in the way of originality or surprises, but the quality cast all put in solid performances and Lumet certainly still knows how to pace a story and crank up the suspense. No gimmickry, no pointless frills; just an extremely well crafted and intelligent thriller.

Very dark, realistic and with outstanding acting this dramatic thriller tells the story of a jewelry robbery gone wrong and the catastrophic consequences it has for the family involved. The non-linear way to tell the story through the eyes of the protagonists adds an additional level of suspense. While some parts could have used some trimming, the result is still gut-wrenching as the noose tightens around the character's throats and you can't help but wonder how this mess is gonna end. Well done.

Sidney Lumet is a director that's no stranger to crafting intense pieces of work. In fact, he's a master at it. Just look at a few from his highly impressive filmography like "12 Angry Men", "Fail-Safe", "Network" or "Serpico". He's also no stranger to a heist movie, having made one of the sub-genre's best in "Dog Day Afternoon". In "Before The Devil Knows You're Dead" - his last film before his death - Lumet returns to that sub-genre and, once again, delivers with aplomb. Hank (Ethan Hawke) and Andy (Philip Seymour Hoffman) are two brothers whose financial woes are having a direct effect on their lives. In order to solve their problems, Andy hatches a plan to rob a jewellery store. He calls it a "mom and pop" operation and it's quite literally that: the store is owned by the brothers' parents. If all goes down as it supposed to, then nobody will get hurt. Like so many crimes of this nature though, things can and do go wrong, dragging everyone down with a devastating turn of events. Lumet builds his film slowly and assuredly, revealing the characters' motivations bit by bit before peeling away the layers of their downfall. To do this, he cleverly plays with timeframes; changing back, forward and during the robbery itself. The focus is on the two brothers, as well as their emotionally stilted father (Albert Finney). Of course, this type of narrative device is nothing new. We have seen it used many times before but Lumet's skill is in keeping it fresh and gripping. In support of his deft handling of the material, the actors deliver outstanding performances across the board; Tomei nails the ditzy wife routine; Hawke is marvellously high strung and weasel-like; Finney lends his usual reliability and there's a small but welcome role for a threatening Michael Shannon. Unsurprisingly though, it's Hoffman's movie. He has a real presence here shifting from secretive to calculated then deadly with absolute ease. It may be unfair to single out one particular actor but this is another example of Hoffman's incredible ability to completely inhabit a character. His downfall in particular, is of powerful and tragic Shakespearean proportions and he completely captures the intensity of a deeply immoral man. Sidney Lumet was in his 80's when he directed this, yet it shows a vibrancy that could easily be associated with a much younger director. With a canon of top-quality films behind him, this is as good and as riveting as anything he has done. Sadly it was his last but what a film to go out on.

Before the Devil Knows You're Dead Quotes