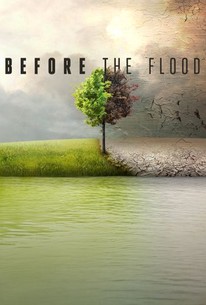 Before the Flood Videos

Before the Flood Photos

This epic documentary follows Leonardo DiCaprio as he travels the world to examine firsthand the effects of climate change, and to learn more about possible ways to prevent catastrophic damage that could make the Earth unsustainable for human life. During his journey, he speaks with such influential figures as President Barack Obama, Pope Francis and tech innovator Elon Musk, and makes a speech before the United Nations calling for greater action on this issue.

Enric Sala
as Self

Sunita Narain
as Self

Anote Tong
as Self

Tommy Remengesau
as Self

Jeremy Kent Jackson
as Self - Ph.D

Lindsey Allen
as Self

Greg Mankiw
as Self

Piers Sellers
as Self - Dr.

Eddie Albert
as The Fiction Writer

Leonardo DiCaprio
as Himself - Narrator
View All

News & Interviews for Before the Flood

View All Before the Flood News

Critic Reviews for Before the Flood

...an effective and impassioned documentary.

This is well-researched, clearly articulated, and quite frankly terrifying stuff. Before the Flood makes you want to slap people in the face with your knowledge.

It should all resemble a vanity project except for one thing: The film lays out the case for reform with steadfast rigor.

If you want a whistlestop tour of all things climate change then this necessary and urgent film is the movie for you. But those hoping it will give new depth to climate activism will be disappointed.

"Before the Flood" may not tackle too much new ground, but given the sincerity of its message, its ability to assemble such a watchable and comprehensive account gives it an undeniable urgency.

Another global warming warning sign, more honorable in its intentions than in having a distinct voice to ultimately make a difference.

The result is an emotional film, modestly directed by Fisher Stevens, that examines the issue on both a highly personal and global scale.

If the filmmakers had merely enlisted DiCaprio as a narrator, the visual imagery and information would still have been powerful, and important enough, to capture our attention.

Whether you're a world leader or a mega-movie star, there's little change to be made from preaching to the choir.

The first half of the film states the climate change problem, the second half lists solutions, including dietary choices like eating less beef. Because of the solutions listed in the film, it isn't as depressing as it otherwise would be.

Regardless of what perspective you have going into the film, there's something to learn from DiCaprio's three-year journey in making it.

This is one of many documentaries about climate change; many aren't much fun, but with DiCaprio at its center, this one offers crucial, current information, as well as a measure of hope.

Audience Reviews for Before the Flood

I read an article in Rolling Stone magazine interviewing Leonardo DiCaprio and Fisher Stevens before this doc was released. It was a promising concept and was aiming to be the next An Inconvenient Truth. Leo talked about how making The Revenant, set in a time when humanity was working to tame, to civilize, to bring a new natural wilderness under control, made him recognize the ways that the environment could fight back. Unfortunately this documentary is not as compelling or as visually iconic as An Inconvenient Truth. Perhaps there are too many hard truths, sacrifices, and prescribed changes that need to happen especially in America's comfortable consumerism for this film to really make an impact. DiCaprio travels the world meeting with various environmental activists (while he is seen in various stages of grizzly beard growth for his role in The Revenant). With the troubling vision of the end of the world as a constant reminder it is not clear whether mankind can do enough or will unite behind this issue to do enough in time to stop the damage done to our only home... this pale blue dot.

Topical and very true to the growing issue at hand. It's still amazing that people consider this a hoax when the scientific facts are starring right at you. Corruption aside this documentary has a core statement to be made, opening our ignorance. There is a growing issue with fossilised fuels for years and our dependence is a concern, we just aren't moving quick enough to renewable energy. It's a shame that Tesla and other important companies are championing solar in America when the chinese are already making the leap. The doco doesn't touch on the chinese buying other countries resources like coal seam gas in Australia, they are heavily linked to fossilised fuels, just not directly. Globel warming is a huge concern and growing issue, idiotic politicians saying that because it's cold, global warming doesn't exist. Trump is an idiot and should not be president, such a narrow minded bigot. watch this and educate yourself and share with others.

Before the Flood Quotes