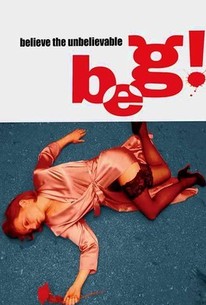 This British slice-n-dicer features plenty of blood and gore as it chronicles the events at St. Caninus, a run-down private hospital. Chaos reigns at the hospital following major budget cuts by its wealthy owners. They are considering making even more. Meanwhile the head of research has been murdered and now Penny, head of the women's ward, and Dr. Rogers, a slime ball, are battling it out. ~ Sandra Brennan, Rovi

There are no critic reviews yet for Beg!. Keep checking Rotten Tomatoes for updates!

There are no featured reviews for Beg! at this time.