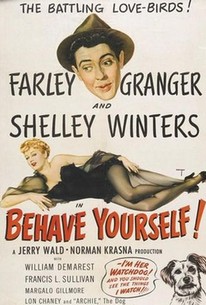 One of the oddest comedies of the 1950s, Behave Yourself! stars Farley Granger and Shelley Winters as a pair of none-too-bright newlyweds. Granger and Winters adopt a stray pooch named Archie, who unbeknownst to them has been trained as a go-between for a couple of underworld gangs. To the ever-mounting amazement of our hero and heroine, corpses begin to pile up all around them as one gang endeavors to rub out the other during a million-dollar smuggling operation. While it's quite possible to treat murder as a farcical situation-remember Arsenic and Old Lace?--the killings in this film are sometimes too graphic to induce laughter (there's nothing terribly mirth-provoking about gang flunkey Hans Conried lying dead in a bathtub with a bullet hole between his eyes). Another detriment is the casting of Granger and Winters, both of whom are woefully unsuited to their roles. In fact, such veteran villains as Lon Chaney Jr., Sheldon Leonard, Francis L. Sullivan and Elisha Cook Jr. come off funnier than the stars! The film's best sequence occurs during the closing cast credits, so try to stick around after the "THE END" title. Behave Yourself was the first coproduction between Wald-Krasna Productions and RKO Radio.

Hans Conried
as Gillie
View All

Critic Reviews for Behave Yourself

It provides many hearty laughs, largely due to the garish characters among the cops and robbers.

Audience Reviews for Behave Yourself

Farley Granger is a poor man's Cary Grant and Shelley Winters tries her hand at being a good girl (!!!) in this surprising comedy about a clueless couple unwittingly caught between two gangs squabbling over money and the cops who are also clueless and unwitting. Low expectations should be left at the door, it's better than you thought it might be.

Silly piece of fluff with an awfully high body count for a comedy.