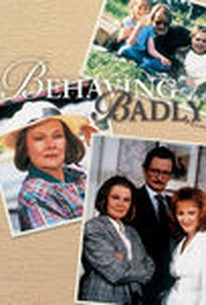 Based on a novel by Catherine Heath, the four-part British miniseries Behaving Badly starred Judi Dench as Bridget, a typically dutiful upper middle-class wife and mother. Upon learning that her husband is a philanderer, Bridget is shocked but willing to forgive. But when hubby walks out, she decides to kick over the traces and have some fun of her own, which -- in time-honored "double standard" fashion -- thoroughly scandalizes her family and friends. Behaving Badly first aired in 1988 over Britain's Channel 4. ~ Hal Erickson, Rovi

Guy Scantlebury
as Jonathan
View All

There are no critic reviews yet for Behaving Badly. Keep checking Rotten Tomatoes for updates!

There are no featured reviews for Behaving Badly at this time.