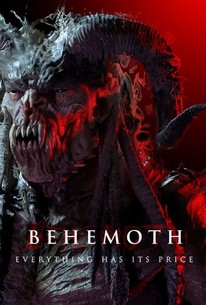 After working for an environmentally corrupt chemical corporation for a decade, Joshua Riverton (Josh Eisenberg) is ready to tell all. His daughter is gravely sick, and he believes the corporation is to blame. But stepping out as a whistle-blower could mean losing his already fragmented grip on reality. Throw in an unplanned kidnap of his ex-boss, Doctor Woeland (Paul Statman), and the stakes are higher than ever in this supernatural horror film. Directed, co-written, and co-produced by Peter Szewczyk.

This film has a bunch of faults and takes more than its fair share of missteps. But it also displays nearly as many memorable moments of pure unbridled creativity, sequences of bedeviling bravado that forced me to sit up straight.

I love a juicy horror/fantasy freak-out movie, and Behemoth fills the bill for off-the-charts craziness, backed up by excellent special effects and a creepy villain.

The narrative just grinds on unpleasantly but artlessly -- except for those computer-generated nasties. They deserve to be in a better film, one that doesn't rely so heavily on them to work, and then doesn't work anyway.

Behemoth is an interminable monstrosity.

'Behemoth' might sport some slick visual effects but that doesn't excuse forgettable performances and an eco-horror production that detrimentally becomes nothing more than a one-note VFX showcase.

There are no featured reviews for Behemoth at this time.